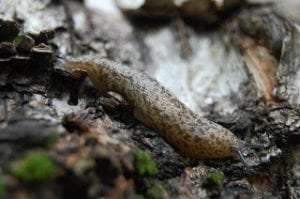 The arrival of cooler nights with some valley fog and heavy dew creates favorable conditions for many creatures that require excessive dampness. Among those forms of life that function best in moisture laden surroundings are the slugs, a collection of invertebrates known for their slimy, unappealing appearance, incredibly slow rate of travel, and ability to wreak havoc in gardens.

Slugs, along with the snails, are gastropod mollusks. As a general rule, slugs lack the rounded or spiral-shaped exterior shell that typifies snails. There are many different categories of slugs, and attempting to determine the exact identity of an individual can be as challenging as trying to figure out what species of mosquito has just landed on your arm.

All slugs have an elongated body that is coated with a thin layer of mucus which causes it to glisten when light hits it at just the right angle. This slimy covering helps the slug retain a high water content within its body and gives it a distinctly gushy feel when touched. This mucus is also reported to have a most disagreeable taste, which discourages some creatures from eating a slug. Additionally, this mucus creates a rather slippery outer covering which causes a few birds some difficulty in picking up this lethargic organism. Yet, despite the external coat of goo, many small forest predators, like salamanders, the garter snake, toads, and the wood frog devour a slug when encountering one of these mollusks on the ground.

The underside of a slug’s body, known as its “foot” also produces a type of mucus that allows this creature to effectively glide over various surfaces. Since dirt and other small items on the ground would naturally stick to a gooey critter, a continuous ribbon of slime is most helpful in allowing the slug to move about without developing an unwanted layer of debris over its underside.

After a slug travels to a feeding site, this ribbon of mucus dries and creates a temporary record of their movement. While most of these trails are impossible to detect on the forest floor, they occasionally become visible when a slug moves over a relatively smooth surface, like a board, or a narrow section of sidewalk.

This ultra-thin carpet of mucus can adhere to almost any surface. And because the slug has the ability to cling to this slime, it is capable of climbing nearly vertical objects, such as the stalks of herbaceous plants and the shoots of low shrubs. Being able to access the lower leaves of ground plants provides the slug with a wealth of material to consume.

While all slugs have food preferences, most species are known for their ability to ingest a wide assortment of items. Rotting leaves on the forest floor, mushrooms and other types of fungus, animal excrement, and fallen fruits and berries are all chewed on by slugs. Gardeners are also well aware of the slug’s taste for the leaves of certain plants, like lettuce, and the juicy products of others, like tomatoes.

The unique ability of many types of slugs to ingest material contained in animal waste one night, and then relocate to a leaf to scrape away at its surface a few nights later has made slugs an ideal intermediate host to numerous parasites. The eyelash-size nematode that is fatal to moose and known to many as “brain-worm” has a complex life cycle dependent on the slug’s attraction to both fecal matter and leafy material. While New York’s moose population seems to be relatively free of this condition at present, it is because of the lack of this nematode in the Adirondacks where they mostly live, rather than a lack of slugs.

As autumn approaches, slugs lay numerous small clusters of eggs in shady spots that are protected from drying during periods when rainfall is absent. These sites also tend to be located where snow is likely to accumulate, which helps insulate the ground against the cold, and keeps it moist next spring when warmer weather returns. As the eggs hatch, a new generation of slugs begins to roam the forests and semi-open areas, whenever dampness prevails, in their search for material to eat.