Machines that could stitch leather for shoes soon also appeared and events like the Civil War spurred the technology on. The U.S. Army ordered thousands of machine-made boots for its soldiers. During this time, Russel Crego (1820-1892) was one New York shoemaker who made a very successful leap from making shoes by hand to selling sewing machines, not only to factories but to the home market.

Russel Crego grew up in a mercantile family headed by his father, John S. Crego (d. 1855), who was a grocery dealer in Columbus, Chenango Co., NY. Russel began his career as a shoemaker in Columbus and moved to Trumansburg, Tompkins Co. by 1855.

Around this time, Russel must have seen the writing on the wall, because by 1864, he had formed a partnership in Utica, Elmore & Crego, which became an agency for Singer Sewing Machines. The firm was located at 208 Genesee St. and carried boots and shoes in addition to sewing machines. Competition in the sewing machine market was fierce and Singer faced stiff competition. That year Russel’s eldest son, Oscar Marsters Crego (1844-1930), submitted the following competitor analysis to the Singer offices in New York City:

Your favor of the 24 inst has been rec’d enclosing note as stated. In regard to the Scofield & Simmonds Machines we would say First we rec’d from you a letter dated May 2nd requesting us to look into the matter and upon which we did not buy. Afterwards one of your traveling agents called here and examined matters and requested us to purchase one of their machines and send it to New York to you when Mr. Crego was in New York. Mr Hopper[?] received the request and since that time we have been trying to get one but we only just succeeded on account of their having orders so far ahead. The persons claiming the patent are Scofield Simmonds, but the manufacturing is named on by Scofield, Simmons & Co. “This Co.” consists of Palmer & Son, their respective names we gave you in our last. At present they are manufacturing about four per day and are constantly increasing their business. Everyone that has known anything about their machines says of it just as people did and do now of Singer’s, i.e., the more they know of it the better they like it. One Shoe manufactory here has thrown out Singers machines entirely and replaced them with the Scofields S Machine and unless they can be wound up they will prove the greatest opposition to the Singer machine that has ever yet appeared. You did not mention having endorsed this ($50) Fifty dollars on the note.
Yours very resp

Scofield, Simmons & Co. was a Utica sewing machine manufacturer which had won a prize for the “best machine for manufactories” at the state agricultural fair in 1863. In March 1864, Charles Scofield and Adolphus Simmons received a patent (US41790) for improvements to the sewing machine. Other companies producing machines in the state at the time were Grover & Baker, New York, and Wilcox & Gibbs, Elmira.

By 1867, Elmore had dropped out of the business and “Russel Crego & Son,” appears on orders like the following for Singer machines. The firm remained at 208 Genesee St. in Utica.

Care Thorn & Pomeroy Utica
30 new Fam Mach [Family Machines] in Crates and we will remit the last of next week enough to make our a/c within the $10,000.
Please forward this order enclosed before this or any previous order by us.

In 1868, company letterhead shows that Russel Crego & Son was a general agent for Singer’s Sewing Machines. The agency covered Chenango, Herkimer, Jefferson, Lewis, Oneida, Otsego and St. Lawrence counties and also dealt in silk thread, needles and sewing machine fixtures. By December 22, 1869, the Cregos had sold the agency to Floyd Chamberlain and D. J. Cushman, 113 Genesee St., who quickly started complaining to the Singer Company that the Cregos were still selling Singers into their territory.

The Cregos had moved east and were selling Singer machines at 564 Broadway, Albany, NY. By 1871, the agency covered Albany, Clinton, Columbia, Delaware, Essex, Franklin, Green, Hamilton, Montgomery, Saratoga, Schenectady, Warren, parts of Otsego, Rensselaer and Washington counties in New York and Berkshire County in Massachusetts. The firm wrote to Singer on December 7, 1871 to inquire about adding Fulton Co., NY, to the agency. 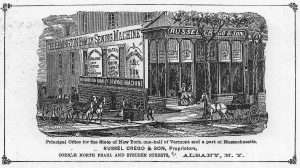 Around 1875, the Crego agency switched manufacturers and began representing Remington Sewing Machines. Remington was famous in New York for manufacturing firearms, but when demand for guns declined after the Civil War, the company expanded by making sewing machines. Russel Crego & Son sold Remingtons from an office at 61 North Pearl St., at the corner of Steuben, in Albany.

Their territory comprised New York State, half of Vermont, and parts of Massachusetts. During this time, Russel Crego employed his younger brother Charles A. Crego (1829-1912) as a general agent at 24 South Main St., Norwich, Chenango Co., NY.

By 1879, Russel had moved south to New York City and transformed the firm into a produce dealership. Interestingly, this was similar to the business run by his father, but Russel now operated on a much larger scale. A business card  from around 1885 shows Russel Crego & Son was located at 334 Washington St. in Manhattan and dealt in butter, cheese, eggs, poultry, game and county produce. Russel Crego retired in 1890 and died on January 7, 1892 in New York City. The firm continued into the 1920s at 167 Chambers St. and was managed by his son Oscar M. Crego.

Note: The author is a distant relative of Russel Crego.