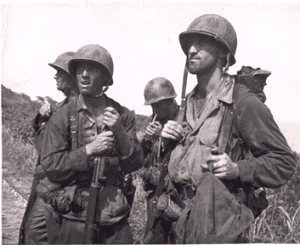 By the end of the day, more than 900 out of the approximately 1,100 soldiers in those two battalions would be casualties. Many of them were from the Albany-Saratoga region. Nearly all the approximately 30,000 Japanese attackers were killed in what was the last major enemy assault on Saipan during 25 days of fighting that left about 15,000 Americans killed, wounded or missing in action. Another 20,000 Japanese civilians were killed or committed suicide out of fear of American troops.

The 27th Infantry Division was a New York National Guard organization called up for federal service in September 1940, a year after Germany’s invasion of Poland. The division was sent to Fort McClellan in Alabama in October 1940 for training maneuvers. Things got off to a tragic start when two teenage girls were killed as a freight train plowed into the crowd that overflowed the tracks at the Saratoga Springs train station during the sendoff for the 105th Regiment’s Saratoga-based Company L.

The 27th Division was still in Alabama when the Japanese bombed Pearl Harbor on December 7th, 1941, drawing the U.S. into a second world war in less than 25 years. The division was deployed to California later that month, and from there its four regiments – 105th, 106th , 108th and 165th – began shipping out to Hawaii beginning in late February 1942 (the 108th would be transferred to another division in 1943). Most of the men in the 105th and 106th regiments were from Upstate New York, while the 165th Regiment mostly consisted of soldiers from the New York City area.

Elements of the division got their first taste of combat during the Gilbert Islands campaign in November 1943 and the assault on the Marshall Islands in February 1944.

The entire 27th Division participated in the Saipan invasion, which started on June 15th, 1944, when two U.S. Marine Corps divisions fought their way ashore. The Army division began landing on June 16th after heavy USMC casualties. The ensuing battle saw some of the fiercest fighting in the entire Pacific Theater of the war. Faced with rugged terrain and an enemy determined to fight to the last man, American marines and soldiers used artillery, flamethrowers, hand grenades and small arms fire to overcome Japanese positions.

By July 6th, the 27th Division and the Marines had driven the few thousand remaining Japanese defenders to the island’s northern end. Around 4:45 am on July 7th, the enemy launched their final attack on positions held by the 1st and 2nd battalions of the 105th Regiment.

Estimates of the size of the attacking force vary, but at least 4,000 and as many as 6,000 Japanese charged the American lines. The 1st and 2nd battalions’ positions were overrun as waves of enemy soldiers, many of them armed only with swords or knives tied to poles, swarmed into rear areas, where hand-to-hand fighting ensued as the Americans ran out of ammunition.

The attack lasted all day. It ended when survivors of the onslaught, their backs against the sea, received reinforcement from nearby units. In all, the two battalions of the 105th Regiment lost 406 men killed and 512 wounded. Afterward, the 27th Division counted the bodies of more than 4,300 Japanese attackers, including nearly 3,000 killed by the 105th Regiment.

The 27th Division was still heavy with New Yorkers when the Saipan battle started. As a result, several hundred soldiers from the Empire State were among the 27th Division’s casualties, including about 160 New Yorkers from the 105th Regiment who were killed, with dozens of those deaths occurring during the July 7th charge.

Three members of the 105th Regiment would receive the Medal of Honor posthumously for their heroics on July 7th, 1944, including two soldiers from Troy: Lt. Col. William O’Brien and Sgt. Thomas Baker. O’Brien is buried in his hometown, while Baker’s remains were returned from Hawaii in 1999 and reinterred at the Gerald B.H. Solomon Saratoga National Cemetery in the town of Saratoga.

Arthur Robinson, now 98, is likely the last of Saratoga County’s 27th Division veterans still living, along with Wilfred “Spike” Mailloux, of Halfmoon, a Cohoes native who was wounded in the final attack. Mailloux, 97, is the last living member of the 96 soldiers of the 105th Regiment’s Cohoes-based Co. B who were mobilized in 1940.

Read more about the Second World War and the people of New York State here.