The site of the present Sampson State Park in Romulus, Seneca County, NY was formerly the site of the Sampson Navy Base. As the United States found itself at war following the attack on Pearl Harbor in late 1941, the U.S. Navy had an immediate need for sailors. Basic training bases, or boot camps, were constructed across the country to meet this emergency requirement.

The Sampson Naval Training Station was constructed on the east side of Seneca Lake, the largest of New York’s fabled Finger Lakes, and named for Admiral William T. Sampson. Admiral Sampson hailed from nearby Palmyra, and had distinguished himself as a career naval officer, from the American Civil War to the Spanish American War. President Franklin D. Roosevelt, when Governor of New York, traveled extensively on its lakes and canal network aboard the state yacht, and played an important role in site selection. The fact that the extremely deep Seneca Lake does not typically freeze in the winter was an important factor in locating a naval base in Upstate New York.

The Sampson Base was ready for service in 1942 after only 270 days of construction. Prefabricated structures were built across the country, shipped by rail, and quickly assembled at the new facility. The base occupied over 2,500 acres and more than four miles of Seneca Lake shoreline. Sampson had the capacity for a resident population of 40,000 bluejackets when it became operational, larger than many upstate cities. The nearly half-million sailors, WAVES and nurses who trained at Sampson went on to all theaters of conflict, and all types of Naval operations. 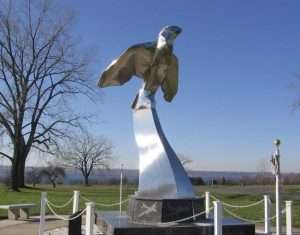 Before the Second World War ended, Sampson played other roles, such as becoming the Navy’s eastern tuberculosis center. In the immediate aftermath of the conflict, a portion of the base was allocated to New York State for housing faculty and administrators in connection with the peacetime crisis for college facilities to serve returning veterans.

Sampson College, along with similar emergency institutions Champlain and Mohawk were racially integrated, with a planned existence of two years by which time established colleges could be expanded and students transferred. During this temporary use, Sampson fielded a football squad and contested other upstate schools such as Ithaca, University of Rochester, Brockport, Hobart and Colgate.

In 1948 the War Assets Administration began boarding up buildings at Sampson to preserve them in case of a national emergency, and Sampson College ceased operation in June of 1949. The property reverted to the Navy Department, who in 1950 considered leasing the base to New York for use as a State Park. However, circumstances half-a-world away on the Korean Peninsula, revised that plan and in November of 1950 the Air Force took over the Training Station.

By January of 1951 the first Air Force recruits began arriving at the east shore of Seneca Lake, and activity reminiscent of the days following Pearl Harbor returned. The Air Force needed to relieve their suddenly overwhelmed training facility at Lackland in Texas, and the men sent to Sampson needed to be clothed in Army olive drab and were issued combat boots, which may have been serendipitous considering the sleet and snow. The training post was brought up to speed, and thousands of Airmen were trained there.

In the spring of 1956 the Air Force announced that due to smaller recruit training loads, it would close one of its basic training centers, and Sampson AFB was selected. New York’s chief power broker Robert Moses hatched an attempt to transfer the Air Force mission at Mitchel Field in congested Nassau County to the upstate base, but that endeavor failed because most of the Air National Guard reserve force lived in the metropolitan New York area. The loss of the military facility, and the payroll of their permanent staff, had a large negative economic impact on the Finger Lakes region.

It took a few years of political wrangling, but in October of 1960 Governor Nelson Rockefeller announced that the Empire State had acquired the deed to Sampson from the General Services Administration, and planning began for a new State Park, which would retain the Sampson name.

Two unique sculptures have been created to commemorate those who passed through Sampson on their way to the Nation’s service with both the Navy and Air Force.

The “Sampson Boot” is depicted in sailor garb, with his sea bag on his shoulder, waving a greeting. The heroic sized, painted metal sculpture was created by Felix W. de Weldon (1907-2003), who had a special affinity for this subject as he saw service with the U.S. Navy during the Second World War. This sculptor has created other war memorials, most notably the Marine Corp Memorial (Iwo Jima Monument) in Arlington, Virginia. The “Sampson Boot” sculpture stands on a conglomerate stone pedestal, inside a traffic circle on the State Park’s entry road. A plaque on the base reads:

“This memorial is dedicated to the 411,429 Naval Recruits and untold thousands of Ships Co., Service School graduates, Waves and nurses who were assigned to the Sampson Naval Station. Sampson was opened October 20, 1942 until the end of WWII. To our shipmates who made the ultimate sacrifice for their country and those who survived, we The Sampson WWII Naval Veterans dedicate this memorial September 6, 1991.
To The Living – Smooth sailing, fair weather, and favoring winds and tides.”

Combined service veterans created a museum at the State Park in the building that was the former base brig/jail. At the entry to the museum stands an Air Force Monument titled “Pitching Up,” overlooking Seneca Lake. The monument is a polished stainless steel falcon, soaring skyward with wings outspread, mounted on an octagonal granite pedestal, supported by a square base.

Seven of the granite pedestal panels are engraved with aircraft images of Sampson AFB’s era, which are: a Boeing B-29 “Super-Fortress” bomber, a North American Aircraft F-86D and F-86F “Saber’ jet fighters, a Lockheed T-33 “Shooting-star” jet fighter trainer, a Convair B-36 “Peacemaker” bomber, a Lockheed C-130 “Hercules” transport, and a Lockheed C-141 “Star-Lifter” transport. One panel of the pedestal reads:

“This monument is dedicated to those men and women who served and trained at Sampson Air Force Base during the years 1950 to 1956. By the bond of men, their flight is won.”

The sculpture was created by Dexter Benedict, Professor of Art, Emeritus, Keuka College, and fabricated by Smith Metal Works, Newark, New York, and dedicated in 2003.

Photos, from above: Sampson Boot sculpture by Felix W. de Weldon; and Pitching Up sculpture by Dexter Benedict.