UBS Arena, the $1.5 billion multi-purpose facility being built next to Belmont Park race track in Elmont, Nassau County, NY, is expected to be home of the New York Islander hockey in the upcoming 2021–22 NHL season. The location has a storied history.

The new racing facility, which would become Long Island’s Belmont Park, was comprised of 400 acres north of the Hempstead Turnpike and 160 acres on the south side. 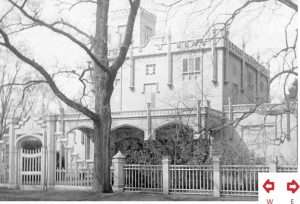 The Manice acreage acquired included an anglophile style manor house, thought at that time to be more than a century and a half old. The Manice Mansion, a palatial gray stone Tudor-Gothic edifice with nearly one hundred leaded-glass windows and accompanying shutters, castellated turrets and quoin posts tapered to conical finials and a lofty square tower, fronted on Hempstead Turnpike.

Manice was in the unique position as a global shipping magnate to collect plant specimens from around the world as a hobby, and place them in his own display. The structure was surrounded by magnificent gardens with a wide variety of flowering and fragrant plants, groves of trees, and grounds that included pools and fountains.

The Westchester Racing Association incorporated the mansion into their design plans. The location of the chateau placed it between the Belmont Park main track and the turf and steeplechase course across Hempstead Turnpike, making the building a perfect location for a clubhouse shared by both ovals.

When Belmont Park opened in 1905, some 40,000 enthusiasts saw a dead-heat in the Metropolitan Handicap, and the modified Manice Mansion served as the home of the Turf and Field (T&F) Club, the most exclusive of New York’s suburban country clubs. Provisions had also been made for serving on the verandas al fresco.

Certainly on race days, but perhaps more importantly on dark days, the T&F Club provided a facility to host a multitude of social events, at the nation’s largest race course.

August Belmont II, President of the Jockey Club, would often stage dances at the T&F Club. The walls shook with Strauss and Waldteufel waltzes, which were said to be preferred by Belmont. About the same time the Jockey Club purchased a self-playing Imhof & Mukle orchestration, which reportedly rivaled human orchestras in sweetness of tone and expression. At more than thirty feet in length, the massive instrument pleasantly reproduced the orchestral strings, brasses, woodwinds and percussion, and was installed in a special Organ Room at the T&F Club. Music and dancing always played a large role in social events at the T&F Club, and many press articles gave accounts how the various orchestras from ocean liners moored in the Port of New York performed at the Manice Mansion luncheons, after which they were treated to a day at the races.

While the United States was embroiled in the First World War, which began spreading a global pandemic, several acts of sabotage occurred on American soil, including at Belmont Park, where several fires where intentionally set which unfortunately killed more than two dozen horses and destroyed numerous buildings. The Manice Mansion was undamaged, perhaps due to its masonry construction.

All homes of a certain age have tales of spirits, and so it was the with the Manice Mansion, where many thought they saw the specter of an attractive young women in stiffened petticoats, half dressed in preparation to attend an important social affair, moving along the stairs and balconies, anxious and determined not to be left out of the merriment.

The Long Island Rail Road (LIRR) has always provided a rail connection to Belmont Park, which exists to the present day. The LIRR transported T&F Club members in specially appointed parlor cars, reserved for members only, who were identified by a special badge they wore.

The T&F Club, since it was incorporated in 1895 in Westchester County, had always been exactly that, a club run for the benefit of its members, who at that time were less than inclusive in an era when that was accepted.

In 1927 the Westchester Racing Association decided to consolidate operations to the north side of the Hempstead Turnpike, and closed the Belmont Park Terminal track and developed the turf and steeplechase course into a housing tract. The T&F Club from that point onward would support only the main track. By this time the Manice Mansion required some updating, and a large octagonal pavilion for dining was added.

Perry Belmont, the son of August Belmont and the brother of August Belmont II, who had been involved with New York racing for his entire life and who was 86 years old in 1937 and a past president of the club, made a gift of the original gate from Jerome Park to the T&F Club, where it was prominently installed as the main entrance.

Pari-mutuel wagering did not reach the Empire State until 1940, and the new tote ticket selling and cashier windows gave Belmont Park a different look. There was a single selling-cashier window unit in the T&F Club, and a closed circuit television.

An improvement added in 1941 was a new promenade along the side of the T&F Club, visible to most in the dining area and which was used as a runway for models demonstrating the wares of famous fashion houses between races, and would become known as “the fashion terrace.”

The attack on Pearl Harbor vaulted the United States into the Second World War, and everyone in the nation was shuttled down unexpected paths which had never been anticipated. From 1943-45, the meet dates assigned to the Saratoga Association were conducted at Belmont Park due to travel restrictions preventing use of the upstate track. Military uniforms were in abundance at Belmont Park those summers, but the Manice Mansion was one of the strictures of conflict, and the historic structure was shuttered for the duration.

The post-war economic boom that resounded across the country ushered in a return to normalcy and allowed the T&F Club to return to its former eminent location in the old pile.

Sculptor Herbert Haseltine completed his famous heroic statue of Man o’ War in 1948. He began the work several years before, and modeled it from life at Samuel Riddle’s Faraway Farm where the great horse spent his retirement. The plaster original he had created for the foundry to pour the casting from was painted gold and exhibited where “Big Red” won the Belmont Stakes. A close-up view of the statue was afforded to badged members.

The decade of the 1950’s introduced a new event at the Mansion, the Belmont Ball, scheduled for the evening before the annual running of the Belmont Stakes, with a New York charity to benefit. A portable dance floor was set up outdoors and exciting fundraising auctions were staged during the Ball, where furs, jewelry by Van Cleef and Arpels and also Cartier, clocks by Black, Starr & Gorham, a miniature Crosley automobile and spirits donated by caterer Harry M. Stevens were sent to the block. Other interesting auction items were table-top bronzes of past Belmont Stakes winners by the sculptor June Harrah Lord, and a plate un-shoed from the next day’s Belmont Stakes winner. Celebrity auctioneers helped stoke the bidding interest, and they were frequently drawn from the press-box, with turf writers such as Joe Palmer and Red Smith delivering the chant. 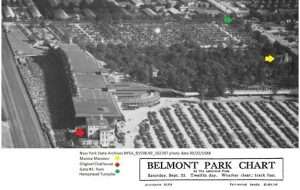 The middle years of the 1950’s saw a paradigm shift at Belmont Park just as the racing plant was reaching its golden anniversary, when a new management group took charge. The Greater New York Association, which would soon relabel itself the New York Racing Association (NYRA) had no future plans that included the Manice Mansion. The T&F Club had lost their home.

Planned changes at Belmont Park following the 1956 season included demolishing the original trackside clubhouse, which was located when races were originally run clock-wise, and moving the LIRR terminal north of Hempstead Turnpike, with a pergola connecting the new train station to the grandstand across this location. Also planned were new exit/entrance ramps linking the Cross Island Parkway and Hempstead Turnpike with grade separated crossings, and additional parking. With palatable regret, many lamented the Mansion being steel-balled into rubble.

The T&F Club continued on, with locations at both Aqueduct and Belmont Park after the Manice Mansion had been consigned to history. The society who conceived of and built Belmont Park, and its various structures, and those who supported countless events there ever since 1905 are gone with the winds of time. However, I believe that their premise of what was enjoyable remains and continues as UBS Arena at Belmont Park, new home of the Islanders, evolves with our generation into a new era. I am all in, . . Let’s Go Isles!