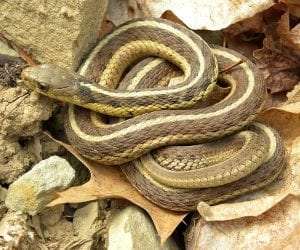 It’s not uncommon to encounter a garter snake as summer weather become the norm. In New York State there are two species of garter snakes, the eastern or common garter snake, and the ribbon snake. Both are approximately a foot and a half to two feet in length and have the same prominent yellow strip running down the entire length of their back from the base of their head.

Both snakes also have an additional yellowish strip extending along their sides, the edges of which may not be as sharply defined as the one on their back. Both species can also vary in color, and some individuals also possess a more checkered or mosaic pattern to their coloration. Additionally, the brightness of their colors may depend on whether an individual will soon be shedding its outer covering of scales or has recently acquired a new layer of this transparent coating.

Like other snakes, the garter snake must shed its protective outer layer of scales in order for its body to expand in size. Just prior to shedding, the scales become translucent, which makes their color duller. In the days immediately after the new layer of scales has formed, the snake appears to be brighter in color.

While there are subtle differences between these two species in physical structure and in certain markings, the similarities between them are far more numerous. This creates a challenge in making a positive identification, especially as one quickly slithers into a crack between two rocks, into a dense pile of brush or under pieces of debris on the forest floor.

It is the ability of the garter snake to function in a cold climate that allows this reptile to flourish in New York State. While the garter snake prefers its surroundings to range between 80 and 90 degrees during the day when it is active, it can continue to be active for a considerable period even when the ground and air remain in the low 50s. Should the air drop into the low 40s, or upper 30s, the garter snake attempts to locate a spot where the temperature of the ground is significantly higher. Places in which the sun is or was beating down on the ground to create a thermal oasis, or where a mound of rotting organic material is generating some warmth of its own are likely to attract a garter snake until the weather warms again.

Like other reptiles, the garter snake has difficulty digesting the food that is in its system when its body cools below a certain level. In order for it to derive the nourishment from the items that it has consumed, its body must be at a temperature of about fifty degrees. While this may not seem to be too cool, it is lower than what most snakes are able to tolerate during the summer season.

Along with its cold-hardiness, the ability of the garter snake to grab a multitude of small creatures that happen to stray in front of it, and pull them down into its throat also contributes to this snake’s ecological success. The garter snake is known to strike at and then swallow animals ranging in size from earthworms and small salamanders to medium size toads, young mice and voles, and the eggs of birds that make their nests on the ground.

While many people are repulsed by the sight of a snake, especially if it happens to be close to their feet, these reptiles play an important role in our environment. Garter snakes are one of the few predators of toads in our region, and they help to limit the population of numerous other small creatures. Garter snakes, in turn, are preyed upon by various animals, such as hawks, raccoons and fox. Garter snakes pose no threat to humans and should always be left alone.