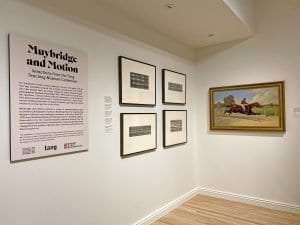 “Muybridge and Motion” is part of All Together Now, a regional collection-sharing project organized by The Frances Young Tang Teaching Museum and Art Gallery at Skidmore College with the support of the Henry Luce Foundation.

This year’s fine art exhibition, “Chasing Summer” celebrates the Steeplechase Hall of Fame induction year with 31 works of steeplechasing art by British and American sporting artists from the 19th and 20th centuries. “Chasing Summer” also celebrates the return of 13 works from the collection that were previously on loan and have not been exhibited at the Museum in decades.