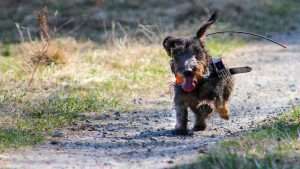 As the title of the animated TV series Scooby-Doo, Where Are You! suggests, getting lost was a frequent premise. From 1969 onward, the cadre of teen gumshoes has spent a lot of their time looking for young Shaggy, who always disappears to smoke a joint (so it’s implied), and then to satisfy his raging munchies afterward. His dog Scooby-Doo of course tags along for the food. I recall one episode where Shaggy attempts to navigate a forest by looking for moss on the north sides of trees. He should’ve just asked Scooby for directions.

A 2013 paper published in Frontiers in Zoology suggests that dogs line up with Earth’s North-South axis when they defecate. Researchers took two years to observe 1,893 poop events, somehow accounting for a range of weather factors, before concluding that the number one element that influenced how dogs did a Number Two was Earth’s magnetic field. Perhaps the hound-winding pre-poop turning dance most dogs perform is to calibrate their internal compass.

We know that most non-human animals can find their way around without asking directions or checking their phones, but science has proven that we have innate homing abilities as well. The mechanisms are not as yet entirely understood, but one thing which may be helping humans to navigate is the fact we have metal in our heads. That’s right – move over, Magneto. Some people have more brain-iron than others, and most of us know at least one individual we suspect of having rust between their ears. The truth is that we all have ferrous-rich cells located in our cerebellums and brain stems which can help us orient to North.

Without question, other animals are better at non-GPS navigation than humans. When we talk about critters which can expertly find their way around, the homing pigeon probably comes to mind. These birds have an uncanny ability to accurately find their way back to their owners even when taken more than a thousand miles away. True story: in New Zealand, a “Pigeongram” mail service ran from 1898 to 1908, complete with special stamps. Homing pigeons were also vital leading up to the 1944 Normandy invasion when radio silence was essential.

Bird navigation has been well-studied, but much remains a mystery. Although birds use a variety of mechanisms to find their way around the planet, such as landmark recognition and solar orientation, many bird species migrate only at night, so terrain and solar position can’t help. This is why sensitivity to Earth’s magnetic field is critical.

Luckily for us, Earth is a kind of induced magnet thanks to its rotating core of molten iron. If it weren’t a giant magnet, we’d all be fried to a crisp by solar radiation. Recently it has come to light that animals employ a protein molecule called a cryptochrome to sense the planetary magnetic field. This involves being attuned to light wavelengths between 400 and 480 nanometers.

Birds, it turns out, are serious metal-heads, having (as one researcher elegantly put it) “iron-containing sensory dendrites in the inner dermal lining of the upper beak.” There you have it, clear as a bell in plain English. Ferrous-rich nerve cells were detected first in homing pigeons, but all bird species are thought to have them. Long-distance migrants need these most, but even poultry and resident birds are known to be endowed with an inner compass. In a research paper published in the journal PLOS One in February 2012, principal author G. Falkenberg writes “Our data suggest that this complex dendritic system in the beak is a common feature of birds, and that it may form an essential sensory basis for the evolution of at least certain types of magnetic field guided behavior.”

And heavy metal is not just for the birds. Bacteria, slugs, amphibians and loads more species are unconscious collectors of iron as well. A current study on human responses to magnetic fields found most subjects reacted to lab-generated magnetic fields. As observed on real-time functional brain scans, subjects could even detect when the polarity was reversed as part of the study. In the March 18th, 2019 issue of the journal eNeuro, lead author Connie Wang writes “We report here a strong, specific human brain response to ecologically-relevant rotations of Earth-strength magnetic fields. Ferromagnetism…provides a basis to start the behavioral exploration of human magnetoreception.”

What really caught my attention is a recent report out of South Korea. In an April 2019 PLOS One research paper, Kwon-Seok Chae et al. found that male subjects who had fasted for an entire day seemed to orient themselves in a direction they keenly correlated with food, even when blindfolded and wearing ear plugs. That I can believe.

As a last resort we could always ask “In which direction would Scooby-Doo doo?”