On November 11th, 1919, the first anniversary was celebrated of the Armistice that ended the First World War. For the occasion, a grand ball was held at London’s Royal Albert Hall. Top of the bill was the hugely popular Southern Syncopated Orchestra, one of the first jazz bands to visit Britain, Scotland, and Ireland.

The Orchestra took the nation by storm and helped breathe joy back into Edwardian Britain. The SSO transformed the London club scene and was the first band of black musicians to play at the fashionable Brighton Dome. Arriving there in August 1921, they stayed for a month.

Tragedy would bring an end to this chapter of musical history. In October, it will be hundred years ago that the SS Rowan sank off the Scottish coast. 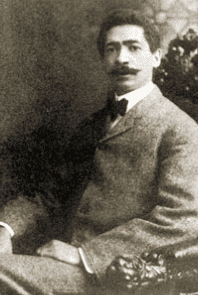 The Southern Syncopated Orchestra (SSO) started life in 1918 as the New York Syncopated Orchestra. Formed by African-American classically trained composer and violinist Will Marion Cook, the band was made up of twenty-seven musicians and nineteen singers. Performers came from New Orleans, New York, Philadelphia, Guyana, Barbados, Antigua, and Ghana among other places.

Born in Washington, Cook would become one of the most important figures in the pre-jazz era. After the death of his father, he was sent to Chattanooga, Tennessee, to live with his grandfather where he heard black folk music for the first time, but his career remained focused on classical music. From 1887 to 1889 he studied at Berlin’s Hochschule für Musik with Joseph Joachim, the famous violinist and associate of Johannes Brahms.

Upon his return, he continued his studies at New York’s National Conservatory for Music at West 25th Street where Antonin Dvořák was teaching. Unable to find employment at any musical institution, he turned his considerable talent to popular music. His first big success was the musical Clorindy: The Origin of the Cakewalk (1898) performed at the Casino Roof Garden on Broadway.

Outside the theater world, Cook gained respect as a choral and orchestral conductor. In 1910 he became a contributing member of New York’s Clef Club, an organization of African-American musicians led by James Reese Europe. He served as chorus master and as assistant-conductor of the Club’s orchestra. Working with Reese Europe may have inspired the idea of forming the New York Syncopated Orchestra.

One of the SSO’s star performers was the legendary (and highly paid) New Orleans clarinettist Sidney Bechet. Having discovered a soprano saxophone in a shop in Wardour Street, Soho, he requested a double octave key to be added and soon dazzled audiences with the extra power this new instrument gave him. Bechet put the SSO and jazz on London’s musical map.

An orchestra with ever changing members and repertoire, the SSO performed a mixture of jazz, ragtime, spirituals, minstrel songs, and light classical music. The orchestra made a deep impression across Europe.

The band toured Britain between 1919 and 1921 and quickly became a staple on the London club circuit. They were invited by the Prince of Wales (future King Edward VIII) to perform at Buckingham Palace on August 19th, 1919. Some hundred guests joined the event which was held in a drained-out lake in the palace gardens.

During their 1921 “Farewell Tour of Europe,” the orchestra completed three weeks in October at the Lyric Theatre, Glasgow. Its members left the city on Saturday night, October 8th, having boarded the SS Rowan bound for Ireland.

The SSO was scheduled to play a series of highly anticipated concerts at La Scala Theatre, just off Dublin’s O’Connell Street. Will Marion Cook had left the orchestra by that time.

Departure of the ship was delayed because of the late arrival of the band. In thick fog, whilst approaching Corsewall Point before sailing south into the Irish Sea, the Rowan was rammed by the American Glasgow-bound steamer West Camak. While passengers were in the process of leaving ship, she was hit again by the British Clan Malcolm. The Rowan was cut in two and sank quickly.

Thirty-six lives were lost in the disaster, including that of Captain Donald Brown. Eleven crew members and twenty-five passengers drowned. Many bodies were never recovered from the sea. Eight victims were members of the orchestra. Singer Frank Bates was one of those who went down with the ship. Pete Robinson’s body was found after the sinking. He was buried in an unmarked grave in London’s Tooting Cemetery.

Captain Brown was held responsible for the first collision for sailing too fast under dangerous conditions and failing to sound a whistle (under maritime law all ships are required to signal their presence with a foghorn). 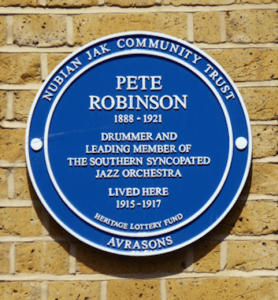 The tragedy received widespread media coverage in Britain and beyond. On October 10th The Irish Times reported the sinking of the passenger ship. The paper mourned the loss of lives that included a “number of the members of a negro orchestra which was to have opened an engagement today in Dublin.” Milan’s newspaper La Domenica del Corriere published a full-page sensationalist image of the disaster produced by its long-standing illustrator Achille Beltrame.

Survivors of the calamity were brought back to Glasgow, where theaters staged relief concerts in aid of Southern Syncopated Orchestra members and help them replace their musical instruments, all of which had been lost. The ensemble quickly regrouped. After attending the funerals of their colleagues in London, its members traveled to Dublin. On October 17th, 1921, the orchestra opened at La Scala for the delayed two-week engagement to public acclaim, before going on to play venues in Derry and Belfast.

The Orchestra was disbanded in November 1921. No recordings of the group have ever been discovered and it is unlikely they ever recorded. Its legacy may now be largely forgotten, but following the Dublin concerts jazz became increasingly popular in Ireland. The SSO stirred a fierce response in traditionalist circles. 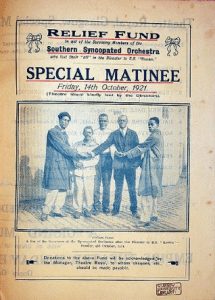 When jazz became widespread in Europe in the aftermath of war, it elicited strong emotional reactions. Jazz, it was feared, was a music of uprooted peoples. It symbolized the ascendancy of an alien element in global culture.

Negative emotions make for poor politics as they preclude rational judgement. In Europe, the hatred of jazz in certain circles and the rise of chauvinism overlapped. Ideologically motivated criticism of the new music was rampant in Nazi Germany and Soviet Russia. An additional aspect of jazz anxiety was the Jewish identity of many musicians (Irving Berlin, George Gershwin, and others).

The battle over jazz was fought out in traditionalist Ireland. Founded in December 1922, the first decade of the Irish Free State coincided with the Jazz Age. The wireless and gramophone transported unfamiliar rhythms to every corner of rural Ireland. Returning immigrants brought records and sheet music back from London or New York. Jazz crossed all political, geographical, and linguistic boundaries.

The SSO was not the first African-American ensemble to visit Ireland. Philadelphia-born drummer Louis Mitchell and the Seven Spades band had toured British and Irish music halls from April to November 1917. Later in his illustrious career he would bill himself as the “first man to bring jazz to Britain.”

Ever since Louis Armstrong and his Hot Five recorded “Irish Black Bottom” in November 1926, everyone seemed hit by jazz fever: “All over Ireland / You can see the people dancin’ it / ‘Cause Ireland’s gone Black Bottom crazy.”

Parish priest Peter Conefrey was a zealous defender of Irish cultural traditions and a preserver of sexual morality. On New Year’s Day 1934, he led a demonstration of several thousand people along the main street of Mohill, County Leitrim, to inaugurate his Anti-Jazz campaign.

Banners read “Down with Jazz” and “Out with Paganism.” Traditional pipe bands spurred the marchers on. In his speech Conefrey warned that jazz was “borrowed from the language of the savages in Africa, and its object is to destroy virtue in the human soul.”

Moral guardians of religious values and cultural puritans of the Gaelic League despised jazz-inspired dancing above all. Unlicensed dance halls sprang up all over the country where unsupervised youngsters were let loose to experience music’s all-disturbing power of sensuality. The “Devil’s Music” lured them towards depths of depravity.

A dreaded source of ruin amongst traditionalists, jazz had a younger and more open generation stomping for joy. Music creates controversy. It does not eradicate prejudice; it simply outlives it as moral crusaders come and go and disappear into oblivion (who remembers Father Peter Conefrey?).

Illustrations, from above: the only surviving photograph of the entire ensemble taken outside Brighton Dome in August 1921; portrait of Will Marion Cook (Library of Congress); SS Rowan; Achille Beltrame‘s image of the sinking of the SS Rowan published in Milan’s newspaper La Domenica del Corriere; Memorial plaque on the front of 8 Crewsdon Road, Lambeth, installed by the African and Caribbean Nubian Jak Community Trust in July 2013; and Relief Fund in aid of the surviving members of the SSO.