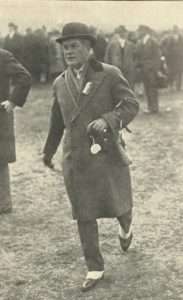 The 1920s witnessed a new era of Americans who were at ease committing their hard earned dollars toward the privilege of being spectators of live sport. In horse racing, John McEntee Bowman became the President of the United Hunts Racing Association, an organization of cross-country enthusiasts in 1922.

Bowman was an impressive fellow, certainly one of the best rags-to-riches stories in turf history, from immigrant groom to multi-millionaire owner and track operator, while developing a successful national business brand, the Biltmore Hotel chain. Through his flagship hotel and banquet facilities in New York City, Bowman was able to cultivate the social side of jump racing during the winter months, which increased the sport’s following immensely. 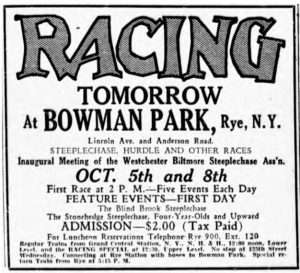 When the Westchester Racing Association decided to parcel-off the Belmont Park Terminal Course into a housing development in 1927, he needed a new venue to continue racing.  Bowman was building a luxury resort north of Manhattan in Purchase, New York. Construction of this exclusive retreat had begun a few years before the end of the Terminal track. This facility encompassed several hundred acres, and the construction taking place was setting a new standard for accommodation and resident services.

Bowman decided this location, in Westchester County between the waters of the Hudson River and Long Island Sound, would provide a solution for United Hunts losing their competition site in Metropolitan New York. This well-planned facility already had numerous provisions for horse sports, such as polo, hunting, and miles of bridle paths supported by well-equipped stables. He had the further advantage of enlisting the support of Harry Buck, veteran racing secretary and industry insider who played a key role in salvaging New York racing, to assist him in making his new enterprise, Bowman Park, a success.

Finishing touches on the 125-acre facility were quickly made to the 13 furlong track and 3.5 mile cross-country course, reminiscent of the saddle-shaped spectator friendly Morris Park. In order to expedite the construction of the new facility, the three grandstand structures from the Belmont Park Terminal Track, which was being dismantled on Long Island, were relocated to the site. Buffet luncheons would be served in a tent alongside the course for the 1927 opener.

Bowman Park also featured benefit events like polo contests and horse shows, advancing a favorite charity of Bowman, the Cathedral of St. John the Divine in the Morningside Heights section of Manhattan, and the unique sports wing which is a component of that institution. 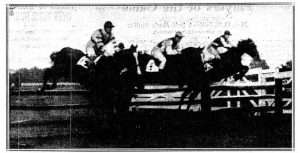 The second season at Bowman Park was more exciting than the first, with Amelia Earhart doing touch-and-go’s on the polo grounds in her Avro Avian, while she resided at the Putnam residence in Rye, completing her first book. The inaugural running of the New York Turf Writers’ Cup was added to the 1928 season stakes schedule. The conditions were four year olds and up, gentleman riders, for 3.5 miles over post and rail. The first Cup winner was Gold Trap, a gelding owned by Walter O. Briggs and ridden by G.A. Wilson, a highly regarded amateur jump-jockey of the day.

The same owner/rider combination prevailed again in 1929 with a horse named Lieutenant Seas, navigating over the slopping result of down pouring rain. Incidentally, Walter Briggs was the owner of the Detroit Tigers baseball franchise. Dry but gusty conditions predominated on the day of the 1930 New York Turf Writers’ Cup, and a nine year old veteran fencer named Barleycorn, in the colors of Mrs. Thomas W. Durant and ridden by Charles R. White, succeeded by nine lengths in the feature race of the day at Bowman Park.

The Westchester venue was popular from the outset, and the picturesque scenic beauty and high level of service developed a fine reputation for Bowman Park. Mr. Bowman sold his holdings in Westchester County to a party of investors which included himself, taking on partners in a group which included future New York Racing Association (NYRA) Chairman (and Westchester resident) John W. Hanes. The property was divided, and many of the finest homes in America were built there. Alas, some prolonged poor autumn weather and Mr. Bowman’s health became negative issues for the track, and their fifth season was unfortunately cancelled. In late October 1931, John McEntee Bowman died at age 56, following complications from gallbladder surgery.

After Bowman’s unexpected death, the United Hunts Racing Association relocated back to the Metropolitan New York area, with some of their events held on private Long Island estates. These unfortunate circumstances of upheaval put the New York Turf Writers’ Cup event into an extended hiatus, not returning until 1938 at Belmont Park.

The Bowman Park property itself was the western portion of the Blind Brook Country Club. The property hosted all types of horse sports and also Scottish Games, the circus, and the county fair. The most completely equipped equine center in the Northeast would now be known as; the Blind Brook Turf and Polo Club. The turf oval was thought to present conditions found in Europe, and the facility even adopted the Continental, or clockwise racing direction. Most of the legendary names in jump competition, jockeys, trainers and owners took part in events in Westchester County.

Perennial favorite performers at Blind Brook were of course their own polo team, but also the Cadets of the nearby United States Military Academy’s polo squad from West Point. Many of the great polo teams, and the best players in the world bowled there as well, including the United Kingdom’s National team, and that of their then colony in India. Other international performers that created much interest and brought out the crowds were conducted by the United States Olympic Equestrian Team. Their performance at Blind Brook in early June of 1936 might be the best remembered, as following their presentation there, they entrained for the Port of New York where they sailed for Berlin to compete in the Olympic Games that featured Jesse Owens, Adolf Hitler and the airship Hindenburg.

Pari-mutuel wagering was introduced at the Purchase, New York track in 1948, with the approval of the NYS Racing Commission, replacing the betting rings that formerly existed. The meets annually would donate proceeds from their events at Blind Brook to various charities such as the Boys Club, the Damon Runyon Fund for Cancer Research, the Fresh Air Fund, and the United States Equestrian Team. As with major stakes competitions elsewhere, the racing association held a ball for the social side of its membership. The 1952 occasion was notable for its guest of honor, ingénue film star Audrey Hepburn. 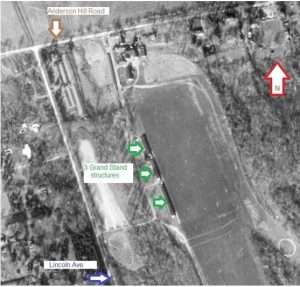 Some of the flaws at Blind Brook provided much of the special allure that pervaded the environs with the unusual, yet delightful, combination of quirky and quaint. Such as the pari-mutual building that resembled a worn out chicken coop with canvas tacked to the windward side, and an unreliable public address system, which converted the race call into a delivery which might be considered politically incorrect in our time.

Without an electronic tote board, the probable odds were chalked on to slates that were hauled aloft for display on a rope and pulley arrangement, which was something between a spinnaker and a clothes line, and less-than smooth working. At a May 1963 event, the supply of programs was exhausted prior to all the patrons arriving, which led to many impromptu introductions between the haves and have-nots. Most of the “stoopers” at Blind Brook were under five years of age, and built close to the ground. The turf writers up from the Big Apple to cover the events, often could not resist good-natured ribbing of their county cousins. The time that the mutual clerks paid off before the race was declared official was never forgotten.

The future of the Blind Brook Turf and Polo Club began to change with Pepsi’s interest in relocating from New York City. Needless to say, the nearby residents were less than pleased with these proposals, and of losing the bucolic vista of their verdant long time and good neighbor. The residents joined together, and made attempts to prevent the proposed development, such as voting to incorporate as a village, and thereby assume zoning control. This effort became one more example that “you can’t fight city hall.” The die had been cast, and the sylvan setting that had provided so much pleasure would be lost to posterity, and the bugle’s call heard no more.

The final events at Blind Brook Turf & Polo Club took place in 1967, and included the fiftieth anniversary of the Westchester Kennel Club show, and polo matches. The Blind Brook mallet men defeated Connecticut 11-6 in the final polo match at Blind Brook Turf & Polo Club. George H. (Pete) Bostwick was the referee, and Herb Pennell was umpire. Having these two legends of steeplechasing and polo participate seemed like a fitting and sentimental ending to competition there. This location is presently the global headquarters of Pepsico.

A representative of the National Steeplechase Association in April of 2020, rationalized that the New York Turf Writers’ Cup events staged in 1928, 1929 and 1930 at Bowman Park are not recognized in the history of this famous Grade 1 race (presently contested at the Saratoga Race Course), due to the conditions of the race having been changed drastically. The hoof beats that once pounded out against turf and tanbark in Westchester County, can today only be imagined.