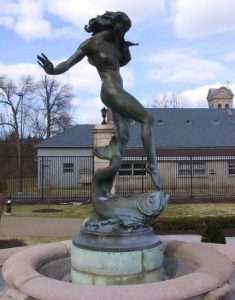 The Arkell Museum and the Canajoharie Library were created by Bartlett Arkell, the founder and president of the Beech-Nut Packing Company as a gift to that community in 1927.

Arkell collected art work for the facility, much of it having a Mohawk Valley theme, with a zeal which can only be admired. His generous gift remains a very accessible collection to be appreciated by a grateful posterity.

The centerpiece on the grounds of the Arkell Museum is a large garden fountain figurine and reflecting pool in the courtyard. The sculpture is named “Humoresque,” and was created by Harriet Whitney Frishmuth, much renowned for her splendid portrayal of the female form.

Arkell had purchased a garden fountain for his Canajoharie residence through the Grand Central Art Gallery in New York. Located in Grand Central Terminal at the time railroads were king, this gallery was a consortium of united artists including Frishmuth, which acted as a common agent to display and market works to the traveling public.

This first Frishmuth work purchased was “Call of the Sea,” which Mrs. Arkell treasured at their home. This led Mr. Arkell to purchase a work for the Museum fountain from the Frishmuth catalogue, and he selected “Joy of the Waters.” The sculpture was installed, and it was immediately realized that the scale did not measure up to the surroundings, and Miss Frishmuth suggested they exchange that figure for the “Humoresque” we see today. 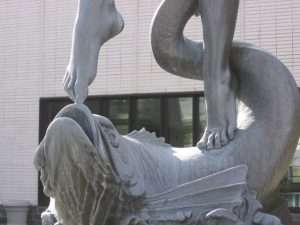 The model for this sculpture was the Yugoslavian dancer Desha Delteil, who posed for most of Frishmuth’s well-known works, and also for celebrated artists Malvina Hoffman, Gutzon Borglum and Gertrude Vanderbilt Whitney. Desha contributed more than just her Grecian figure, as her movement and interpretations of classical compositions were often the basis of Frishmuth’s conceptualization and design.

In this case, “Humoresque,” by composer Antonin Dvorak, is displayed as a gleeful nymph cavorting with admiring fish to produce a magnificent fountain. The sculpture was cast in bronze in 1931 at Gorham Foundry. Valeria Langeloth made the original commission for “Humoresque” for her benevolent recuperation facility, the Valeria Home, in Oscawana, Putnam County, NY (this altruistic institution continues to the present day as the Jacob and Valeria Langeloth Foundation), and the second casting went to the Farmington Hills Library in Michigan.

The model, Desha Delteil, was highly regarded for her ability to hold difficult poses for extended periods, allowing Harriet Frishmuth to execute a piece that seemingly stopped animation. This lifelike representation, which was the essence of the piece, was at odds with the nature of cast metal. This created great difficulties for the foundry, as the mechanics of support needed to be made through the narrowest parts of the represented anatomy. When “Humoresque” arrived in Canajoharie, it was found the big toe of her right foot had cracked during shipment, and the left heel showed strain against the caudal fin of the fish. 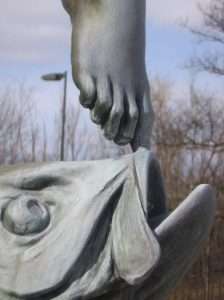 Concern was felt by all involved, and a flurry of letters describing the issue were dispatched downstate, resulting in a plan and solution quickly returning upstate. Gorham Foundry sent repairmen to the installation site, and Miss Frishmuth closely monitored the bronze repair. She visited Canajoharie the summer of the installation, and was pleased with the result of repairs.

Harriet Frishmuth maintained a studio on Sniffen Court, in the Murray Hill section of Manhattan, near the present day terminus of the Queens-Midtown Tunnel. This quaint cul-de-sac was reminiscent of the hideaway neighborhoods of Paris.

Incidentally, sculptor Malvina Hoffman also had her studio at another Sniffen Court address, Pearl Buck once lived there and the location was pictured on cover of The Doors 1967 album Strange Days. Mr. Arkell visited Frishmuth’s Sniffen Court studio and procured “Humoresque” from the artist and her Gorham outlet and made it a gift to the community of Canajoharie, to be enjoyed and appreciated by all.

Harriet Frishmuth frequently traveled through the Mohawk Valley, as she had an Adirondack camp, “White Pines,” near Lake Pleasant in Hamilton County. Frishmuth assisted there in the construction of a small studio cottage, with a fireplace and a window-wall, which allowed her to work outside of Gotham.

Mr. Arkell made one more purchase from Miss Frishmuth that he brought to Canajoharie, her small sculpture titled “Speed,” which Gorham delivered after having it silver plated to match the grill of his Rolls-Royce, where it would serve as a hood ornament.

Harriet Frishmuth left a fine legacy of works in Canajoharie, and across the Empire State, endowing Syracuse University with her papers and several unique pieces. She also left us some of her theories originally expressed in a 1925 Brooklyn Eagle article which still seem to apply:

“One of the wonderful things about sculpture,” said Miss Frishmuth, “is the fact that it lasts. It belongs to no particular time or place, and age adds to its charm and distinction.” She also said in the same article: “Nothing will live that has not truth for the basis of its inspiration and execution. The false ideas of the moment will pass away, and art as the true expression of life will be permanent.”