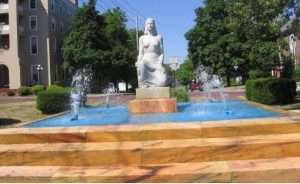 The Veterans Memorial Fountain has stood in Geneva, New York’s Pulteney Park for more than 80 years. It is a gray marble sculpture of a full-size female form, on one knee, thrusting a Hoplite sword into the ground, allegorically symbolizing the cessation of hostilities.

The sculpture, created by Jean MacKay Henrich (1909-2002) and entitled “Our Lady of Peace,” is mounted on a pink marble base and is surrounded by a stepped pool, also of pink marble, from which fountains of water issue upward. The entire Veterans Monument in Pulteney Park was designed by noted architect and professional photographer, Thomas Lyon White of Geneseo, and was partially funded by the Works Project Administration (WPA) during the Great Depression.

The design plan was to symbolically memorialize Veterans of all struggles, rather than any particular person or campaign. The architect and sculptor worked together to develop a simple yet warm tone in the memorial by which Geneva would preserve forever the love of country and sacrifice made by those who did not return home.

The Veterans Association of Geneva dedicated the sculpture on Memorial Day in 1939, and a flat stone in the fountain paving reads: “Erected to the memory of Geneva Patriots who served our Nation in her wars that Freedom might remain our Most Cherished Heritage. Dedicated May 30th, 1939.” It is unfortunate that this same plaque misspells the artist’s name.

The sculpture of “Our Lady of Peace” was carved by the Georgia Marble Company of Tate, Georgia. The dedication of the Memorial Fountain was to occur on Armistice Day (November 11th), 1938; however, circumstances did not allow this to take place. The Geneva Daily Times of October 6th, 1938, reported the postponement under the headline: “Dedication of Veterans Memorial delayed by fault in material.” Deep veining, or streaks in the pink marble, appeared on the sculpture’s face and upper body.

The newspaper reported that Miss Jean MacKay wrote from Georgia that the faults in the marble had not been discovered until the figure was nearly done, which is an inherent issue with pink marble and cannot be anticipated. She felt that with the best interest of the Veterans and the citizens of Geneva at heart, she had to reject that sculpture. The marble company bore the cost of a new block of marble and a month’s labor to carve it, but would not assume the risk with pink marble, and created a second and present monument from what was referred to as “Cherokee gray” marble.

The original pink marble carving rejected by the artist found another existence. The quarry, burdened with the financial trials of the Great Depression, sought to offset a bit of their loss, and sold the sculpture to Will Reeves, owner of the Ashe Memorial Works in West Jefferson, North Carolina. The sculpture, entitled “Pocahontas,” was privately owned but publicly displayed by that company and later Tri County Monuments in West Jefferson, marking their business’ location until about 1975. The ownership passed by probate to Dr. John Gamble, who relocated the Pocahontas sculpture to a private garden in Lincolnton, NC. “Pocahontas” was purchased by the Town of West Jefferson, and placed at Backstreet Park in that community in 2017. 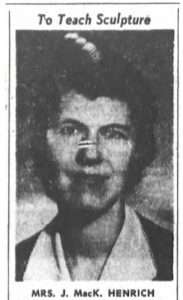 A 1955 Geneva Times article states that the artist was never paid for her work, on either sculpture. Fortunately for posterity, Jean MacKay Henrich wrote to the Geneva Historical Society in 1997, along with her financial contribution towards restoring the memorial fountain that, “Our Lady of Peace is an appropriate name for the War Memorial.”

Her description is “this is in the Classical tradition where a woman may represent a state. Here our country kneels in reverence to the sacrifice of those who died. Her head is raised in courage for the future. Her weapon does not point out at the enemy, but is plunged into the earth, a weapon which may be used but is laid aside in the love of Peace. The material is not bronze, the stuff of swords, but stone, the material of monuments.”

Jean MacKay was born in Halifax, Nova Scotia. She began her studies at the Art Institute of Chicago and graduated from Antioch College, in Art and Aesthetics. She received her Masters Degree from the University of Buffalo, and furthered her studies at the University of Vienna and Academie Amadee in Paris. She married John Henrich in 1943, and he unfortunately became a casualty of the Second World War while working on construction of the Burma Road in Southeast Asia.

It is a bitter irony that a sculptor of a peace monument would have her own family so deeply impacted by the loss of conflict. Jean MacKay Henrich served as the Head of the Sculpture Department at the Art Institute of Buffalo, taught printmaking at the Buffalo Print Club, and also was an Art and Art History Instructor at the Buffalo Seminary from 1946-1979.

Photos, from above: Our Lady of Peace sculpture in Geneva; and Jean MacKay Henrich.