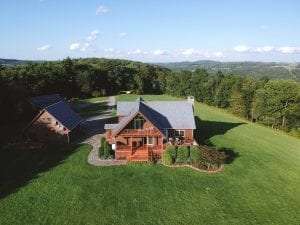 Perhaps the largest apple producer in Sullivan County at the height of the industry here was Martin A. Smith of Fremont Center.

Smith, best known to some as the man who promoted the Holstein cow in the middle of the 19th century, served in the New York State Assembly from 1887 to 1889, and was a serial entrepreneur. In addition to his dairy herd and cultivating the largest apple orchard in the region, he also grew sugar beets for a time, shipping them to Binghamton on the Erie Railroad in an unsuccessful commercial venture to refine sugar there.

The sugar beet enterprise was one of Smith’s few failures, and his apple orchard was so successful that it almost single-handedly spawned a number of spinoff industries in the county.

In those days, shipping apples on the railroad required that they be packed in barrels, so as more apples were produced and shipped out, more barrels were required. That meant home grown wood for the barrel staves and plenty of wooden hoops to secure the staves. Those support industries thrived, and soon barrel manufacturers were nearly as numerous in the county – and just as successful – as the apple producers.

“So immense were the crops of apples produced in Sullivan County that Schmidt alone shipped 1700 carloads of barreled apples out of the county,” Hick wrote. “J.M. Schmidt & Sons had on file letters from dealers they supplied stating that the flavor of Sullivan County apples could not be matched by any other section.”

Hick recounts that thousands of apples were picked by orchard owners and dumped on the ground in separate piles according to variety. Then packers, in the employ of the buyers, would sort through the piles and pack the selected apples in barrels that had been delivered to the orchard in great quantity. “The cull apples were then used for cider or went into making dried apples… Schmidt at North Branch had a commercial dried apple factory that used as many as 70,000 bushels of apples a season.”

Even in 1951, the apple growing industry in Sullivan County had long been defunct. Although he does not cite a cause for the demise, Hick wrote that “all that is left of this great industry of apple growing of this section are the old apple trees neglected over these many years or nearly dead if not already dead.”

The collapse of commercial apple growing in the county soon led to the end of the barrel making industry, and that severely curtailed the demand for locally produced elm, which had been grown largely to supply the cooperages. Before long, once thriving manufacturing centers in western Sullivan County, such as Mileses and North Branch were nearly unrecognizable.

It is a well-known fact that as industries—timber, tanning, bluestone, apple growing — declined in the region, tourism took their place as the principle economic engine. And many of the resources that had once been utilized for industrial purposes — the Delaware River that had been used to transport timber, streams that had powered saw and grist mills, and ponds that had supplied water for the tanning industry or the D & H Canal — were quickly repurposed for roles as recreational venues in the new resort industry.

Now, the commercial apple growing business in Sullivan County is back, to some extent, at least, and ventures such as Seminary Hill Orchard and Cidery in Callicoon, the Aaron Burr Cidery in Wurtsboro, Majestic Farm in Mountaindale, and others are growing apples in great numbers, with more than 4,000 trees among them. These ventures have the added appeal of being attractive to tourists, as well, and at Seminary Hill, for example, accommodations are also available.

Photo of the Mountain House, built from timber felled on the property, is just one of the accommodations at Seminary Hill Orchard and Cidery in Callicoon.