The large covered porch, typical of so many of Saratoga Springs’ Queen Anne style homes, allows an elevated view of “Tex” Hughlette Wheeler’s fabulous sculpture. Charles S. Howard, Seabiscuit’s owner, commissioned cowboy sculptor Wheeler (who’s unique given name of Hughlette was the surname of the doctor who delivered him during his mother’s difficult pregnancy), to “capture the horse from life,” and had two castings made. Howard’s heirs graciously donated this casting, originally at the Howard’s Ridgewood Farm, to the National Museum of Racing. The other bronze which Howard had cast has always stood in the Santa Anita paddock.

This great old house, whose construction began in 1885, was originally known as the Davidson Cottage. It is comical today to see references of these stately mansions as cottages, this nomenclature is just one more of those charming Spa traditions.

The Davidson who conceived of and built this place was John McBain Davidson, who was born in 1824. Just placing that distant year in the perspective of the Empire State’s history, the original Erie Canal was completed in 1825. Davidson’s father had died by the time of his birth, and he was raised by older brothers and his father’s business partner Erastus Corning, who initiated his ward into the hardware business. Davidson later entered into safe manufacturing, when most of the economy traded on a cash basis. Under the name of J. McB. Davidson & Co. his venture was a success. The safe business played a role in the Tweed Ring’s machinations in the city of New York, as it was alleged that Davidson inflated the invoices, so the Ring could pocket the difference. He testified against Tweed, but the affair sullied Davidson’s reputation, if not his bank account.

In 1863, Davidson partnered with Alfred Van Santvoord and Chauncey Vibbard in 1863 to form the Hudson River Day Line, a passenger-only fleet in a time when most river traffic was still involved shuttling canal commerce. He remained involved with these steamers until his death and was also listed as a director of the New York and Albany Railroad.  Davidson left manufacturing in 1867, and was said to be friends of President Chester A. Arthur, Thurlow Weed and William Seward. His brother Gilbert C. Davidson was Corning’s partner at the old Albany Iron Works for a time.

Due to his connection with foundries, Hudson River steamboats, and cockfighting, Davidson became well-acquainted with the pugilistic politician John Morrissey. This association was the basis for his being invited, along with William R. Travers, Leonard W. Jerome, George A. Osgood, John F. Purdy, Cornelius Vanderbilt, John Hunter, Erastus Corning, Jr., James M. Marvin, John H. White and John W. Eddy, into the racing venture John Morrissey was planning in Saratoga in 1863.

In addition to being one of the original incorporators of the Saratoga Race Course, John McB. Davidson was also an original Trustee. Davidson, along with several of these same principals, used the “race-track-at-a-resort” business model as a blueprint when they established Monmouth Park on the Jersey Shore in 1870. Locally, Mr. Davidson was also involved in developing “Saratobogganing” with a three chute slide at Glen Mitchell in Saratoga. 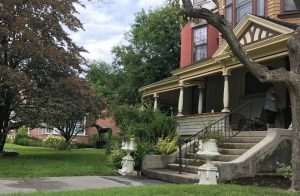 John McB. Davidson was in position to build a notable edifice just a whinny-away from the saddling paddock, directly across Union Avenue from the popular and lucrative race track he had been party to establishing, in an excellent location to relish his attainment. He planned the home with his wife Anna and noted Saratoga architect R. Newton Brezee, and they lovingly referred to the structure underway as Villa Beatrice, after their only child.

The cautionary proverb, “man plans, God laughs” certainly applied to John McB. Davidson as he was struck by lightning at the Vichy Spring colonnade in 1885 and later died of cerebral apoplexy at his home on 47 Franklin Street in Saratoga Springs on January 30th, 1887, before his new home on Union Avenue was ready for occupancy.

His widow, Anna Flora Davidson and their daughter Beatrice became the occupants of the Davidson Cottage. John McB. Davidson had been a great music lover during his lifetime, which was before the advent of recordings. He provided generously for Beatrice, who was ten years old at the time of his death, to study music and vocal training in the best European schools.

Mrs. Davidson and her daughter were active in many of the movements in the first part of the twentieth century, and perhaps were considered a bit eccentric. In 1906 Charles Evans Hughes was elected as New York’s Governor, and he ushered in a series of reforms which would eventually lead to a ban on horse racing in the state.

The fully bearded Governor Hughes was referred to by frustrated horseman as “that animated feather duster.” A news item from the 1908 Saratoga County Fair detailed the dissatisfaction conveyed to the Governor. This included Mrs. John McB. Davidson, and her daughter Miss Beatrice, standing on the seats of their Pierce-Arrow automobile and waving feather dusters, which supported flags emblazoned “Personal Liberty” in the direction of the hirsute State’s Chief Executive, who fled. 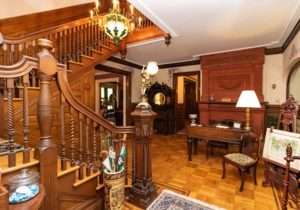 Mrs. Davidson and her daughter hosted many parties at the Davidson Cottage, where festivities of music and fun and were often reported in the local paper. At one such soiree, Beatrice wore a gown popularized by a Hollywood vamp, which exposed more of her being than people were accustomed to, and was often referred to afterward as “backless Beatrice.”

In January of 1915 the Davidson Cottage was the location of Beatrice’s wedding, when she married Lieutenant Percy A. Cook, formerly of the British Navy. The wedding cake was cut by the new Mrs. Cook with the sword used by her husband throughout his service in the Boer War. Percy Cook’s father had developed the Orpington breed of chicken in England, and Percy ran the North American operations. This was at a time when it was common for most households to be poultry keepers. Their business morphed into poultry products and pharmaceuticals, vaulting their enterprise to a much larger scale.

Following Beatrice’s wedding, Mrs. Davidson began leasing the cottage during the Saratoga track season. The introduction of prohibition in 1920 drove the guest trade from the downtown hotels, to the benefit of cottage owners. Notable occupants were Richard T. Wilson, thoroughbred owner and then President of the Saratoga Racing Association, and Joseph E. Widener, then President of the Westchester Racing Association, the operator of Belmont Park.

Mrs. Davidson passed away in 1925, and what was now called the Percy Cook House was placed on the market. Beatrice and Percy Cook had purchased a 49 acre island in the Florida Keys, which is still known as Cook Island. The sale of their Saratoga Springs home took place five years later, to Charles B. Ryan of Troy. The Saratogian of July 29, 1930 reported that Ryan intended to operate “an exclusive year around club” at 203 Union Avenue. This club may have involved recreation other than horse racing. Its site between the race track and the city does seem like a discrete location for this type of “business,” which naturally, is not documented.

Later in the 1930s the former Davidson Cottage property was transferred to Saratoga drug store operator, bank executive, real estate speculator and sportsman, Mac Finn. Through this time the property was mostly vacant. In 1941, multiple deeds for property in Saratoga Springs were turned over to James A. Leary by Mac Finn to settle promissory notes. Attorney James Leary was the longtime Saratoga County Republican Chairman, and on an unofficial basis, the suspected power-broker of many of the illicit gambling operations at the Spa for decades.

Leary was targeted by Senator Estes Kefauver’s organized crime investigations in the 1950s. The 203 Union Ave property was transferred again in 1946, and again received a new name. Hannah Reiss Schauble acquired the mansion, and under her banner Pleasantview, hosted wedding receptions, club luncheons and parties. Ms. Schauble also bought and sold antiques and accommodated guests during the race season.

This operation was functional until the middle 1950s when the property was leased by Michael and Beatrice Sweeney. Mrs. Sweeney was a dedicated community activist who would become Saratoga Springs City Historian. Mr. Sweeney was a State Supreme Court Justice (and listed as a law partner in indictments of Mr. Leary), and together Mr. and Mrs. Sweeney collected antiques and began a family.

By 1965 the former Davidson Cottage was acquired by Ronald and Hannah McGarrigle who moved from New York City with plans to restore Newman’s Lake House, which was unsuccessful. The splendid home next provided office space to SPAC until it was acquired by Phyllis Latin, who operated the American Dance Center on the third floor.