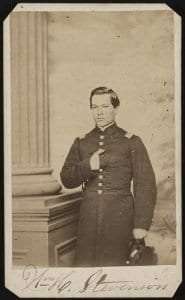 The Ticonderoga Historical Society will commemorate the 160th anniversary of the beginning of the American Civil War with “Adirondack Regiments in the American Civil War,” a program set for Friday, July 9th at the Hancock House, in Ticonderoga, Essex County, NY.  The popular band The Loose Monkeys will perform selections of Civil War-era music during the program.

The program will be led by Brian O’Connor, former history professor and current Library Director for North Country Community College, who will take a look at the significant efforts of the men from the North Country who served in the Union Army during the conflict that lasted from 1861 until 1865.

New York sent more men to fight for the Union in the American Civil War than any other state. The Empire State also suffered the most casualties. Included in those troops were members of the 16th New York Cavalry, which was organized in Plattsburgh. A detachment of the 16th was responsible for the apprehension and killing of Lincoln assassin John Wilkes Booth.

This event will begin at 7 pm and is free and open to the public. The program will be held outdoors, under a tent and attendees should bring their own lawn chairs. Reservations may be made by calling the Hancock House at (518) 585-7868 or e-mailing tihistory@bridgepoint1.com.