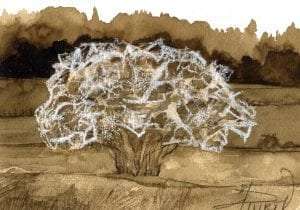 Janet Hayward Burnham, of Bethel, Vermont, was driving to the bank one day when she saw a tree on the side of the road that looked like it was covered in decorative webbing, “cans and cans” of it, as if for Halloween. However, it was June.

Burnham is an illustrator, children’s book author, and writer of sweet (as opposed to sexy) romances and mysteries. She is, in other words, an intellectually curious person and she pulled over for a better look. From the sidewalk, she could see that the whole yard was covered in cottony webbing. Deep inside the webs were yellowish-white caterpillars with black heads. “I’d never seen anything like this in Vermont,” Burnham said. “Clearly, it was infested with something. What were they? Should we be concerned?”

Burnham knew she had a mystery on her hands. Would the caterpillars take over Vermont, the way they had taken over that yard, covering every green thing with white fluff? “Then we wouldn’t be the Green Mountain State, we’d be the fluffy cloud state,” she said.

She called the Vermont Department of Forests, Parks and Recreation to report “spooky fluff” on the tree, and maybe find out the cause. Jim Esden, a department forester with expertise in invasive tree pests, said he would take a look the next day.

The web-covered tree was not a mystery to Esden. The same thing had been reported in the same spot in 2015. As Esden took photos of the filmy, frothy webs, he saw that his hunch was right. The webs had been made by euonymus caterpillars, known to scientists as Yponomeuta cagnagella.

Euonymus caterpillars were first seen in North America in 1967, in Ontario, Canada. That’s where Jean-François Landry, the scientist who seems to know the most about these creatures, is based. He is the curator of lepidoptera (butterflies and moths) for the Canadian National Collection of Insects, Arachnids, and Nematodes at Agriculture and Agri-Food Canada, an Ottawa, Ontario-based national agency.

According to Landry, euonymus caterpillars have been reported in New York, Quebec, Nova Scotia, Michigan, Vermont, Massachusetts, and, most recently, Wisconsin. He didn’t mention New Hampshire, but Kyle Lombard, forest health program coordinator for the state, remembered seeing a cool photo of a web-covered shrub. There are also specimens of the species in the University of New Hampshire Insect and Arachnid Collections.

These caterpillars feed and depend on plants called burning bush, which despite their name, can be bushes or trees. The scientific genus for these plants is Euonymus. Both the plants and the caterpillar are native to Europe, where the tree-version is called a spindle tree. “Ermine spindle moth” is a common name for the caterpillar’s moth.

The species is “unremarkable most of the time,” Landry said. That is, it didn’t just appear in a yard in Bethel in 2017, 2015 and 2001, as noted in state records. It was likely there all along in small numbers. But every once in a while, the number of caterpillars skyrockets.

“An outbreak can be striking,” Landry said. He mentioned a photo of a related species in Sweden, where caterpillars had covered an entire bicycle in white webbing.

Euonymus caterpillars are considered mostly harmless by tree pest experts. They feast only on the non-native plants in the genus Euonymus (which themselves are invasives). Outbreaks are confined to landscaped areas. And, they reproduce only once a year. That gives the plants time to regrow their leaves.

Euonymus caterpillars are busy feeding and building their webs in June, or sometimes, as early as late May. By late June, having eaten their host tree bare, they drop to the ground on their silken threads and spin cocoons. After about two weeks, the adult moth emerges.

The moth is pretty enough, with an inch-wide wingspan. One pair of its slender wings is white with black spots. The other pair of wings is a furry, brownish-gray. Landry said that he only occasionally sees these moths at his porch light, even though they are well-established in Ontario, and never past early July. The eggs hatch in August, but the tiny caterpillars survive the Vermont winter under the hard coating that protected the eggs.

This mostly harmless ermine moth has two troublesome relatives. The non-native cherry ermine moth and apple ermine moth are economically harmful pests of their host plants. On this continent, they are only known to have populations in Washington State and British Columbia.

Burnham was relieved when Esden told her that the webs were not going to cover the Green Mountains in white fluff. She was also relieved that her powers of observation, honed as an artist and mystery writer, had not failed her. This truly was a rare occurrence. “We don’t think it does,” Burnham said, “but the world keeps changing.”

Madeline Bodin is a writer living in Andover, Vermont. The illustration for this column was drawn by Adelaide Tyrol. The Outside Story is assigned and edited by Northern Woodlands magazine, and sponsored by the Wellborn Ecology Fund of New Hampshire Charitable Foundation.