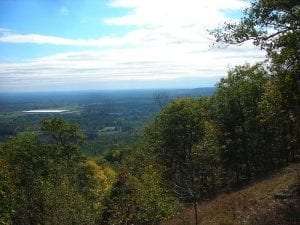 The trip to Mount McGregor was set, if the hospice patient had enough strength to make the journey.

“If the present favorable conditions are maintained, General Grant will travel to Mount McGregor Tuesday, June 23rd,” The Morning Star of Glens reported on June 8th, 1885. “President Rutter, of the New York Central and Hudson Railroad, has placed its special car at General Grant’s disposal for the use of the general and his family on the trip. The car will be attached to a morning express train from the Grand Central depot.”

For months, the Glens Falls morning daily newspaper had been reporting almost daily about the health of the Civil War general and former U.S. President, as medical experts disputed whether throat cancer was the accurate diagnosis.

“The cottage on Mount McGregor, owned by Joseph Drexel, the banker, is being put in condition to receive General Grant and family, who will spend the summer there,” the paper reported on May 14th.

On June 13th, it was reported that the trip to Mount McGregor might be moved up if the weather was pleasant and Grant felt up to it.

“The family are ready to go at the shortest notice, and the general anticipates the change with great pleasure.”

On June 15th, The Evening Post of New York City suggested that Grant would benefit from the holistic sounds of nature and of the clang of the train’s bell coming and going each day, transporting guests to and from the Balmoral Hotel at the mountain’s top.

“The engine’s bell will have a soothing effect on the distinguished patient, like the songs of the birds, the rustle of the leaves in the wind, or the drumming of the partridges. It is pitched in the key of the copper-cow bell, and its gentle twangs will seem to the invalid as if McGregor’s cows were browsing near the cottage.”

On June 17th, news reached Glens Falls, from a New York Sun report the previous day, that Grant might not be able to make the trip after all.

“Very many of those who are informed as to Gen. Grant’s actual condition look upon the plan of removing him from his comfortable home with grave misgivings. That his life is now hanging by a very slender thread there is little doubt among them. … Of course, Gen’ Grant’s household are better able to judge than anybody else what is prudent and what is imprudent for him to do.”

Reporters had unusual access to Grant, with apparently no censuring or restrictions on what would be reported.

“In outward appearance, when clothed and in his easy chair, with wraps over him, the general has not very greatly changed. His face has aged, it is true, but it remains to a great degree its natural fullness. But aside from this, he is a wasted almost to a skeleton, and the bones of his hands and wrists show through tightly drawn skin with the ghastly distinctiveness of a consumptive’s,” The Morning Star reported.

The cottage at Mount McGregor was ready, either way.

“Nothing has been spared to surround the general with everything to provide his comfort. He will live in Mr. Joseph Drexel’s cottage, a short distance from the railroad station on the summit of the mountain. … Should he hold his own until August 1st, it is the intention to remove him from McGregor to the hotel Kaatersville, in the mountains farther south [in the Catskills].”

News has a way of changing rapidly, and Grant was on his way to Mount McGregor on June 17th, even as some Glens Falls residents may have yet to read of the uncertainty in The Morning Star.

It was determined that Grant might not be able to make the trip if he waited any longer.

“The sun rose upon a rusty scene of Gen. Grant’s residence in Sixty-Sixth Street. Servants were hard at work all through the house packing the large pieces of furniture that the family were to take to Mount McGregor,” The Morning Star reported on June 18th, chronicling Grant’s trip the day before.

The change of dateline from “New York” to “Mount McGregor” marked a milestone in the continuing coverage.

“Gen. Grant rose early after a fairly good night’s rest. He expressed neither hope nor fear concerning his journey.”

Grant had been unable to speak for four days, now.

“All the neighbors seemed to know that the general was going away and nearly every window on the block was occupied by sympathetic watchers, waiting to witness the departure of him whom they might never see again.”

Grant and his family left the house a little after 8 am.

“The bright June sunshine seemed to invigorate the sufferer, and he smiled at some remark of Mrs. Grant’s as the carriage passed down the avenue.”

The train left the New York City Forty-Second Street depot at 9 am.

“Before the start the general sat upon a sofa and adjusted his skull-cap and drew closer the scarf around his neck. Two easy chairs were placed in position for the general and (wife),” The People’s Journal of Greenwich, in Washington County, reported on June 18th.

“After the train had proceeded some distance, the general expressed a desire to ride backwards, so he could see the river through the rear door and windows.”

Admirers turned out all along the route, as the train carrying Grant made its way north, passing through Hudson at 11:40 am and stopping at Albany for eight minutes at 12:20 pm, before proceeding on to Mechanicville, Round Lake and Saratoga Springs.

“The depot building (at Mechanicville) was decorated with flags, and presented a fine appearance,” The Mechanicville Mercury reported on June 19th, 1885. “Gen. Grant sat near the rear door of the car, and in response to a greeting of hearty cheers waved his handkerchief.”

Lawyer Robert E. Saile stood at the crossing with a basket of flowers, but the train only slowed and did not stop.

At Round Lake, flags waved from the platform. Grant’s train arrived at Saratoga Springs around 1:50 pm.

Crowds cheered for Grant as the train moved through the village, which became a city in 1915.

Grant said, “Here we are for the mountain train,” referring to the train that ran from Saratoga Springs to the top of Mount McGregor,” The People’s Journal reported.

About 100 members of the Grand Army of the Republic Wheeler post, waiting at the Saratoga Springs depot, applauded as Grant arrived,” The Morning Star reported.

“He responded with a military salute, and the crowd of about 200 people who had assembled about the depot cheered him again and again.”

Grant’s spirit was bolstered as he transferred to another rail car that was waiting on a close by track to transport Grant the last 14 miles to the cottage.

“Before anyone could help him, Gen. Grant stepped off his train, crossed the space to the McGregor car and laid hold of the hand rails. Col. Ford followed closely with outstretched arms, but the invalid climbed up alone. The crowd cheered again and again when they saw this, and the general disappeared inside.”

The last leg of the journey, climbing the steep mountain side, was the roughest.

“Curve followed curve in quick succession and the car pitched from side to side like a boat in a stormy sea. Gen. Grant lay wearily back with closed eyes, except when an extra sharp joltaroused them.”

The train arrived at the mountain top at 2:40 pm.

“On the little platform, which does duty as a station, stood a white-covered hospital cot, with mattress and pillow, which someone had prepared to carry him to the cottage,” but was not needed.

A rustic wooden sign reading “Welcome to Our Hero, 1865-1885,” seemed to imply it was the Civil War general’s final battle.

“Borne up by his tremendous will power the general tottered along for about one hundred feet up the steep path. Then he wavered for a moment and stood still. … The effort to make the assent had exhausted him.”

Others walking along assisted him the rest of the way to the cottage, where Grant sat down on the veranda for about a half-hour before going inside.

“After a while the general reappeared on the veranda, wearing a silk hat and black coat. There he sat for hours, surrounded by his family, drinking in the fresh, clear mountain air. Towards evening a brisk shower came up, but the general braved it and stayed out till the wood mosquitoes drove him indoors.”

A valiant admirer tolerated the wood mosquitoes for the rest of the night.

“As darkness fell, veteran Sam Willett of Lew Benedict Post. 5, G.A.R., of Albany mounted guard before the general’s door. He said he was an old soldier of his and would stay in duty until the general left the mountain.”