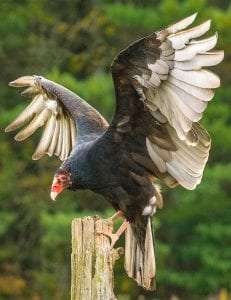 Over the past several centuries, there have been numerous additions to New York State’s flora and fauna. Invasive Species Awareness Week highlights some of the many forms of life that have invaded the region and are currently wreaking havoc with the established members of the region’s plant and animal communities.

However, not all organisms from outside the area adversely impact the environment like Eurasian milfoil or the zebra mussel. One of the largest transplants to New York’s North Country is the turkey vulture, a bird that occupies a niche for which few other creatures are so well suited.

Even though the turkey vulture was occasionally seen in the very southern portions of New York State during the mid to late 1800’s, it was not until 1925 that the first nesting pair of vultures was reported just north of New York City. Over the years, this bird continued to expand its range northward with initial sightings occurring in the Lake George region during the late 1940s. By the 1950s, vultures began to be seen in the Lake Champlain Basin and then during the 1960s in more interior sections of the Adirondack Park.

It is difficult to say for certain when the first pair of turkey vultures nested inside the Adirondack Park. Since these soaring birds are able to travel up to 50 miles in their daily search for food, it is hard to determine the location of a nest which they may have by noting their repeated presence in one specific location. By the 1980s, vulture sightings became routine across all of Northern New York, and it is believed that they are now a regular component of our environment.

Several reasons are often cited to explain the success of this renowned scavenger throughout the Northeast. The vulture has benefited greatly from an expansion of game populations caused by the gradual acceptance of a conservation ethic by our society over the past century. With increased numbers of deer, rabbits, raccoons and other sizable animals, there is also a corresponding increase in the number of wildlife carcasses in the wilds when these creatures eventually meet their demise.

Also, the arrival of the automobile age has provided this and other scavengers with a new source of food – roadkill – that was absent during the time when travel was accomplished by horse and stagecoach. With more animals crossing roads, and vehicles that move faster than a slow trot, there has been a substantial increase in the food supply available to scavengers.

Unlike birds of prey, the turkey vulture lacks the heavy bill necessary to tear into the hide of most dead animals. Since most road killed creatures suffer wounds that create large gashes or openings in the body cavity, the mangled remains of such collisions are an ideal source of food for this bird. Also, the expansion in the range of the coyote over the same period of time has allowed the vulture to utilize the corpse of a deer that dies from a collision with a car, yet which did not suffer any external rips or cuts to its hide.

Because coyotes inevitably find and begin to tear open the remains of dead deer, this canine prepares a carcass for a vulture’s visit. Also when a coyote kills a white-tail, it frequently leaves a portion of the carcass for later use. This presents the vulture with the opportunity to forage as it did centuries ago in southern woodlands before Europeans arrived on our shores.

The gradual warming of the climate is sometimes cited as a contributory factor in the expansion of the turkey vulture’s range. Yet even though a more favorable weather pattern now exists, it is the abundance of food that is considered the primary cause for the ecological success of this bird.

The sight of one or several vultures wobbling slightly as they ride on favorable air currents was unknown in the Adirondacks prior to the Second World War. Over a relatively short span of time this bird has become a well established member of our wildlife community, and now helps to rid roadsides of the mangled flesh and putrefied viscera of creatures that highway crews have not yet removed. And while the role of this unattractive bird may seem disgusting, its presence can never be placed in the same category as purple loosestrife which can create a picturesque scene in an open marsh while destroying the balance that has taken thousands of years for nature to develop in that aquatic setting.