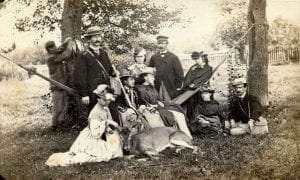 “The season of picnics, excursions and camp-meetings is at hand,” The Granville Sentinel proclaimed. Six days later the heat gave way to refreshing rain.

“The recent showers have done inestimable value to the country,” the Sentinel reported June 16. “Vegetation is springing forth as if by magic. The country is clothed with freshest emerald. The face of nature expresses joy unspeakable.”

It was looking to be a promising agricultural season.

“Farmers are on the second and last hoeing of potatoes. The crops look good,” the North Hebron correspondent to the Sentinel reported on June 31.

“They seem to prefer the lowlands and valleys. Perhaps they find these hills too hard to climb,” the correspondent quipped.

The cheese factory was operating “full blast,” taking in between 10,000 and 12,000 pounds of milk daily from local dairy farmers.

At Warren County in 1885, June started out on the cooler side.

“The garden looks well, but we are afraid of frost killing everything, as it is cold for this time of the year,” the Weavertown correspondent reported in The Morning Star of Glens Falls on June 4.

“Decidedly cool this morning,” The Morning Star reported on June 10. “Fair weather and slowly rising temperature is predicted for today…. These nights make one sigh for a lodge on the shady side of some vast overcoat.”

Weather watchers in June 1886 were optimistic.

“Hudson River fruit growers state that not in years have the orchards and gardens of the Hudson River valley promised such an abundant yield as they do at this time,” The Morning Star reported on June 11, republishing a report from the Troy Telegram. “This is true of every variety of fruit except peaches, which crop will be a partial failure. Strawberries will begin to ripen next week. Cherries will follow closely, both in great abundance, as will also be raspberries, blackberries, currants and all small fruits.”

On June 18, the North Creek correspondent to The Morning Star reported: “Fine growing weather, crops look good, and everybody is saying, ‘Did you ever see such started grass in the first half of June?’”

“The tillers of the soil were very glad to see the rain fall on Sunday and Monday last. Crops look well for the time they have been planted, and an abundant harvest is expected,” The Granville Sentinel reported on June 18.

“Old Sol” heated things up at the end of the month.

“The mercury in the thermometer made a decided movement yesterday, and Old Sol resumed his regular summer vocation in earnest, to the discomfort of those wearing their heavy winter flannels,” The Morning Star reported on June 22.

Unfavorable weather in June 1888 put farmers behind schedule for haying, leaving them hustling to catch up at the end of the month.

“Our farmer friends are now industriously engaged in tilling the soil, that themselves and others may be fed,” The Granville Sentinel reported on June 29. “Their brawny arms and intellects are the physical force that helps feed the world.”