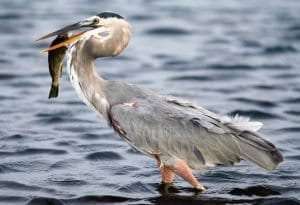 For those people familiar with nature, the uniquely-shaped silhouette of a large bird in flight with a set of thin legs jutting well beyond its tail, and a neck that coils back into a compressed “S” creates an unmistakable image.

Additionally, the slow and methodical manner in which this lanky giant beats its sizeable wings helps make the great blue heron one of the easiest birds to recognize as it flies, even from a distance of well over a half mile.

The great blue heron is a wading bird and uses its stilt-like legs to stand and walk through aquatic areas, some of which may be covered with up to a foot of water. It is in places like these that this predator waits quietly for small fish, frogs, salamanders, and other similar size animals to stray within striking distance. Once a victim is spotted close by, the heron draws its head back, simultaneously stepping forward while thrusting its long and pointed bill directly at the target. Rather than spear its prey, the great blue heron attempts to grab hold of the potential meal and swallow it quickly before it can wriggle free.

From late spring through mid August the amount of time an adult heron spends hunting increases significantly. Not only must the adult heron satisfy its own appetite, but toward the end of May, when the 3 or 4 eggs in its nest hatch, the bird must also meet the demands of the young for a steady diet of animal protein.

For the first several weeks after the eggs hatch, one of the parents remains either in the nest or very close to it in order to protect the babies from being attacked by a forest predator, like a raccoon, or eagle. The other parent travels to a favored feeding site, such as a section of marsh, the edge of a slow moving river, or the weedy shoreline of a lake or pond. There it tries to kill enough creatures to fill its crop for transport back to its nest. Once there, the parent regurgitates chunks of the previously swallowed material into the open mouth of its babies. The constant demand for food by the developing nestlings causes the great blue heron to hunt for prey even during the night, especially when a full moon provides adequate illumination for it to see.

After the first month, the young herons become large enough to prevent a parent from spending more than a few minutes in the nest. At this stage in their development, the nestlings require so much food that both parents are forced to hunt for the majority of the day leaving their babies unattended. As the nestlings get older the parents no longer feed them from their mouth, but rather drop the catch off into the nest and let the young birds fight over it.

Because there is safety in numbers, a pair of great blue heron makes its nest close to the nest of other great blue herons. A colony, also known as a heronry, may contain from a dozen nests to over a hundred. The number is highly dependent on the suitability of hunting areas in the surrounding region. For example, a heronry near Lake Champlain is able to support many more pairs of herons than ones located in sections of the Adirondack Park where favorable aquatic areas are scattered over much greater distances.

In order to minimize the chance of predation from climbing creatures, the great blue heron prefers to construct it stick platform as high as possible in the tallest deciduous trees at the site in which a heronry becomes established. Since a heron nest is around three feet in diameter, the mass of sticks used in its construction can become quite substantial, and the supporting limbs beneath it must be large enough to hold the weight.

Additionally, the nest must be tightly woven into the framework of the twigs from the supporting limbs to prevent this structure from being torn loose during periods of high wind, such as those that accompany strong thunderstorms. In most instances, a pair of herons will refurbish the nest that they occupied the previous year if it was able to withstand the fierce gales that battered it during the preceding winter season.

It takes the nestlings almost two full months before they fledge, and even then these young birds depend on their parents for frequent meals until they can get the knack of hunting for themselves.

There are many creatures that prey on the bounty of animal life that exists in and around wetlands; however, few of these stand out against the background as does the great blue heron.