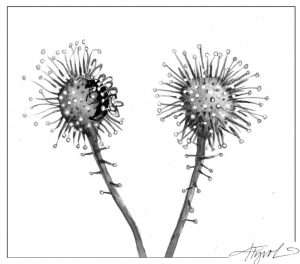 In 1860, a year after publication of his seminal work on the origin of species, Charles Darwin wrote to a friend, “At the moment, I care more about Drosera than the origin of all the species in the world.”

Darwin maintained a lifelong fascination with carnivorous plants, including members of the genus Drosera, collectively called sundews. His research into these fascinating species led to the 1875 publication of Insectivorous Plants, which remains a major reference work today.

Sundews are found on every continent except Antarctica, and over 150 different species and hybrids have been identified. Often referred to as “flypaper” plants, sundews trap their insect prey in sticky hairs on the upper surfaces of their leaves.

Four out of the seven species of sundew native to North America are found in the northeastern United States. The English sundew, an endangered species, lives only in the northern reaches of Maine. The threadleaf sundew, listed as threatened, grows in southern parts of Massachusetts and Connecticut and in parts of New York, New Jersey, and Pennsylvania. The spatulate sundew and the roundleaf sundew grow throughout the region. Sundews around the world are highly vulnerable to over-collecting and habitat loss.

Sundews are perennials, and North American species typically inhabit acidic soils found in temperate bogs, swamps, sandy banks, and fens. Northeastern plants can range from penny-sized to about 3 inches in diameter. (Several tropical species can grow to the size of a small bush, with individual leaves reaching several feet in length.) The leaves can range in shape from nearly circular to grass-like threads, but all function in a similar manner: they trap and digest insects such as mosquitoes, flies, and gnats and absorb the nutrients. In this way, they thrive in soils that would starve most other plants.

How are these botanical carnivores able to turn the tables on their animal prey? How does a sundew attract, trap, digest, and consume an insect? The roundleaf sundew will serve as a working model.

The roundleaf sundew is a diminutive plant and easy to overlook, especially when growing among sphagnum moss, a common associate. The nearly round, green leaves grow close to the ground in a radiating rosette pattern measuring 1 to 3 inches in diameter. The upper surface of each leaf is covered with hundreds of red, hair-like filaments called tentacles. Situated at the end of each tentacle is a tiny, reddish-colored globular gland. Most of these glands secrete tiny drops of what looks like glistening dew. This substance is mucilage, a thick, sticky material that traps prey.

Shimmering in the sunlight, the droplets may fool some insects into mistaking them for a flower’s trove of sweet nectar. Upon alighting on a leaf, the insect comes into contact with the mucilage and is immediately trapped. As the insect struggles to free itself, it becomes more firmly stuck. The trapped insect’s movement triggers a response from the plant’s tentacles, which begin to curl toward the prey. If the victim reaches the leaf’s edge, the hairs along the leaf’s margin block escape by curling inward. The insect dies within about 15 minutes, either from exhaustion or by suffocation as the glue-like mucilage plugs its breathing tubes.

The sundew’s glands then secrete a cocktail of acids and digestive enzymes that cover the entire insect, initiating a digestive process that lasts from 2 to 14 days. The soft parts of the insect are dissolved, releasing a nutrient- and mineral-laden soup which the sundew absorbs through its leaf surfaces to supplement the plant’s growth and aid in flowering. At the end of the process the undigested exoskeleton is all that remains of the hapless victim.

Not all insects initially trapped in the leaf become a meal. Some larger insects may break free of the sticky dew by losing a leg or two, only to die of their wounds later. A significant percentage of trapped insects fall victim not to the plant, but to marauding bog ants or spiders. This pillaging behavior is not without risk, and on occasion the marauders fall victim to the plant’s carnivory.

If insects have the capacity to dream, then sundews surely are the stuff of their nightmares.

Frank Kaczmarek is a photographer and retired biologist and author of “New England Wildflowers: A Guide to Common Plants,” a Falcon field guide published in 2009 by Globe-Pequot Press. He lives in Lyman, New Hampshire. Illustration by Adelaide Murphy Tyrol. The Outside Story is assigned and edited by Northern Woodlands magazine and sponsored by the Wellborn Ecology Fund of the New Hampshire Charitable Foundation.