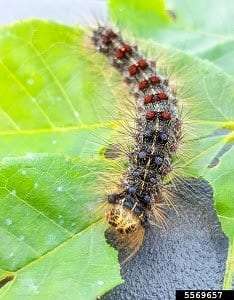 This spring, there has been larger-than-usual gypsy moth populations and leaf damage in several parts of New York State. Gypsy moths are non-native but are naturalized, meaning they will always be around in our forests.

Their populations spike in numbers roughly every 10 to 15 years, but these outbreaks are usually ended by natural causes such as disease and predators. Because of this, the State typically does not manage them and does not provide funding for treating gypsy moths on private property.

The caterpillars you are seeing now will begin to disappear around mid-July when they pupate and become moths. Spraying insecticides is not effective at this late stage of caterpillar development. This time of year, you may choose to use or make a trap on your trees to catch caterpillars while they are still crawling, though this will not erase the population. Monitor your traps regularly for unintended wildlife that may pass through.

In winter, you can help the New York State Department of Environmental Conservation predict next year’s population numbers by conducting egg sampling surveys. In spring, you may scrape egg masses to prevent some hatching, though that will also not erase the population. The spikes in gypsy moth numbers are an unfortunate but cyclical part of New York’s forests.

You can view DEC’s recent Facebook Live about gypsy moths and answers to common questions about them on their Facebook page. For more information on gypsy moths in NY, visit DEC’s website.

Photo of a gypsy moth caterpillar by Karla Salp, bugwood.org.