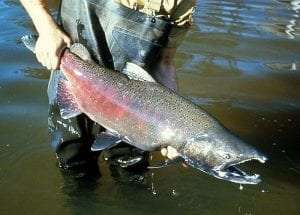 The fish are part of an innovative pen rearing program conducted in partnership with Navy Point Marina in Sackets Harbor and volunteer anglers from the Henderson Harbor Guides Association.

Navy Point Marina used a crane to move the pens into the water and will store the pens during winter months. Volunteer anglers helped care for the fish prior to the stocking effort.

Future pen rearing efforts will be led by angler volunteers with support from Navy Point Marina and DEC Region 6 Fisheries staff. The true success of the project will be determined in the future once DEC sees more adults return to the fishery.