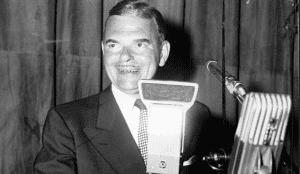 Trivia clue: It was the seal of the Imperial family and is considered one of two national flowers of Japan.

Correct response: What is the chrysanthemum?

The White House was “profusely ornamented” with chrysanthemums when a delegation of Japanese dignitaries visited, The Morning Star of Glens Falls reported on November 15th, 1886.

The delegation was most impressed with technology, however.

“Nothing seemed to tickle them as much as the long-distance telephone between New York and Washington.”

In case you are wondering, the other national flower of Japan is the cherry blossom.

Following are more anecdotes of the lighter side of politics collected from northern New York historic newspapers.

You’ve heard of a political candidate throwing his hat into the race.

James G. Blaine threw his hats into the garbage.

On November 12th, 1886, The Morning Star reported that the Republican politician wore out five “nice silk hats” during his 1884 presidential campaign.

On September 22nd, 1886, The Morning Star reported that Locke Brothers’ store at Sandy Hill was exhibiting in its show window “a fine crayon portrait” of First Lady Frances Cleveland.

“The work was done by James Daily, of Dunham’s Basin.”

On July 11th, 1946, the Associated Press reported that the American Federation of Labor Operating Engineers made New York Gov. Thomas Dewey an honorary union member so that the governor could operate a bulldozer for the ground-breaking ceremony of the New York State Thruway.

On July 6th, 1946, The Post-Star of Glens Falls offered this sage advice about politics: “Never count a victory in Congress before it is won.”

On October 25th, 1886, The Morning Star suggested there would soon be a clear distinction between the would-be and actual political candidates.

“After today you can detect the candidate by his friendly greeting and anxious solitude for the welfare of yourself and your family, while he conducts a hunt for the scalp of his opponent.”

An algebra student would need at least one more variable to solve this math problem inspired by the upcoming nuptials of a President’s daughter and an Ohio congressman.

“Seven thousand invitations having been sent out to the (Alice) Roosevelt – (Nicholas) Longworth wedding, calculate how many pickle-forks the happy couple may hope to receive,” The Argus quipped on February 13th, 1906.

The Argus celebrated the nuptials in an editorial on February 18th, 1906.

“And so they were married – Alice Roosevelt, the daughter of the President of the United States, and Congressman Nicholas Longworth, the happy man, whose long wooing has been a subject of national interest and whose good fortune has brought congratulations from the ends of the earth.”

Here’s a bit of political humor from the February 5th, 1906 issue of The Argus: “Utica has a dog in its city directory: ‘Badgero, Robert, watchman bds, 39 West Street.’ He is the mascot of the Mohawk Valley Railroad Company. But Utica need not brag. Philadelphia has dogs on her voting list.”

Here’s a bit of trivia from the same issue: James K. Polk, the great-great-great grandson of President Polk, was a member of a champion Whist team in Washington, D.C.

Whist, by the way, was the favorite card game of Charles Evans Hughes, who was elected New York governor that year.

Photo: NYS Governor Thomas E Dewey at the opening of the NYS Thruway on June 25, 1954.