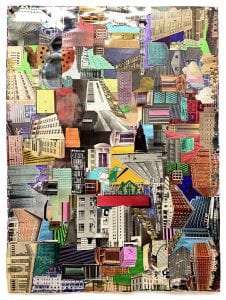 The Lake George Arts Project has announced “Pictures Within Pictures,” a solo exhibition of work by Dan Cameron is set to be on display from June 16th through 26th in the Courthouse Gallery, in the village of Lake George.

“Pictures Within Pictures” will be Cameron’s debut exhibition as a fine artist. The works on view date from his return to art-making in late 2016, with increasing focus and attention on developing his studio work in the intervening years. Since late 2018, he has maintained a combination studio and office in Glens Falls, and all of the works on view were produced there.

Dan Cameron (b. 1956) grew up in Hudson Falls, NY, and graduated from Hudson Falls High School in 1974, followed by studies at Syracuse University and Bennington College, where he earned a BA in 1979. Although this is his first exhibition as an artist, as a curator he has organized international exhibitions throughout the US, France, China, Mexico, Spain, Brazil, Greece, Turkey, Sweden, Ireland, Portugal, Argentina, Chile, South Africa, Ecuador and Taiwan.

Cameron has held senior curatorial positions at the New Museum, the Orange County Museum of Art, and the Contemporary Arts Center in New Orleans, and is the founder of Prospect New Orleans, which premiered in 2008 and will open its 5th edition in October 2021. He has authored hundreds of essays and articles on contemporary art, and taught at the graduate MFA faculties of Columbia University, NYU and School of Visual Arts, among others. In June 2021, Dan’s book on the paintings of Nicole Eisenman will be published by Lund Humphries (London). He currently divides his time between New York City and Glens Falls.

Dan Cameron is set to discuss the exhibitions in a live Zoom conversation on Wednesday, June 16th at 7 pm. To view the conversation, click here.

The Courthouse Gallery is located at the side entrance of the Old County Courthouse Building, corner of Canada and Lower Amherst Streets, Lake George. Hours during exhibitions are Wednesday through Friday noon to 5 pm, Saturday 1 to 4 pm, or by appointment.