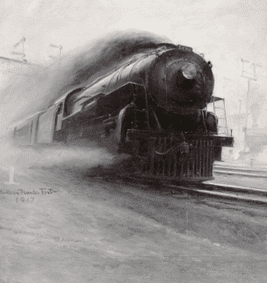 The Albany Institute of History & Art has announced “Romancing the Rails: Train Travel in the 1920s and 1930s,” a new exhibition featuring objects and library materials from the Albany Institute’s New York Central Railroad collection.

“Romancing the Rails: Train Travel in the 1920s and 1930s” focuses specifically on the New York Central Railroad and tells several stories of how it confronted the competition from automobiles with visually stunning advertising campaigns, luxurious passenger amenities, and redesigned modern trains. The exhibition also addresses the often-unrecognized work of thousands of African American porters, waiters, and maids who made Pullman sleeping and dining cars synonymous with luxury and comfort.

Featured objects include rare photographs, posters, locomotive models, historical objects, and a selection of Henry Dreyfuss designed items for the 20th Century Limited. Most of the objects in the exhibition were given to the Albany Institute of History & Art in 1959 by the New York Central Railroad. Since then, the Albany Institute has acquired other objects that enhance the collection.

The exhibition is scheduled to run through February 2022.

The Albany Institute of History & Art is located at 125 Washington Avenue in Albany. For more information, visit their website or call (518) 463-4478.