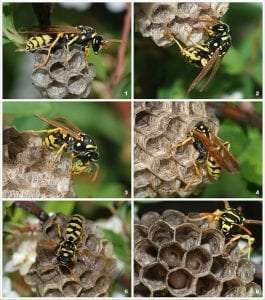 While working around the home this summer, it is not unusual to notice the papery nest of a wasp tucked under the eaves, hidden behind a loose shutter, or placed in some other protected spot. While an encounter with this type of structure may temporarily disrupt a painting project or repair work, such a sanctuary is vital to the summer success of these familiar yellow and black insects, and should be left alone if at all possible as wasps play a role in helping to control the populations of numerous insects, spiders and other bugs.

Out of an entire summer colony, only a few females that are born in late summer with adequate stores of fat are capable of surviving the winter in the coldest parts of New York State. After abandoning their nest and mating with a male, these individuals typically burrow into the soil, or seek shelter inside a thick, hollow log that will eventually become buried by snow.

During mid-spring, when conditions improve, these females emerge from their winter dormancy and begin to search for a sheltered spot in which to construct their papery nest. By chewing on softened pieces of partially rotted wood, and mixing this mass with chemicals in their mouth, the females, known to some as queens, fashion the mixture into a sheet that dries and forms a grayish papery substance. Initially, a small collection of hexagonal cells are produced to house the first eggs laid by the fertile female.

It takes about a week for the eggs to hatch into the tiny, worm-like larvae which remain within the papery walls of their nursery. Because the larvae require a diet high in animal protein, the matriarch of the colony goes in an almost constant search for small insects and other types of invertebrates to appease their appetite.

It takes almost two weeks before the immature wasps are ready to enter the pupa stage, and then nearly two more weeks before the transition into an adult wasp is completed. During this period, the female may add more cells to her infant colony and lay more eggs in order to increase the number of individuals that eventually will inhabit the nest.

By the start of summer, her first in a series of adult offspring emerge from their cells. All of these are females, and they instinctively assume the various chores that must be carried out to maintain the colony. The fertile female eventually settles into the role of simply laying eggs in cells constructed by the recently hatched workers.

During the early summer, wasp colonies are relatively small and contain only a limited number of females. As the number of residents increase, the colony’s need for small insects and other bugs to feed the developing larvae increases correspondingly.

While the larvae require a diet rich in protein, the adults need fluids that contain a high caloric content. Nectar from flowers and juices that develop within fruits and berries, like raspberries and blackberries, are traditionally sought out by adult wasps when they want to satisfy their own hunger.

As summer starts to wane in another few weeks, the fertile female slows the rate at which she lays eggs within her paper covered nursery. Since the increased number of worker wasps now has fewer larvae to feed, their search for bugs eventually turns to a search for the more sugary items that they favor. (In late summer, wasps prefer visiting a table with an opened can of soda, a cup of fruit juice, or some flavorful topping dripping from a burger rather than picking aphids or caterpillars from plants in a garden.)

As the fertile female’s source of sperm dwindles, she will lay a few eggs that fail to become fertilized. These eggs still hatch, but the resultant wasps have only a half set of chromosomes. These individuals are males, and their sole purpose is to mate with those females with an excess of fat in their system that are capable of surviving the winter.

While wasps are noted for the painful sting they can inflict, these insects do help the environment by controlling bug populations. Destroying a papery nest in mid summer before the individuals that can survive the winter develop could impact a wasp population in an area. This in turn allows other bugs the freedom to propagate with fewer checks on their numbers. A simple rule that I try to follow whenever I encounter a wasp nest while painting is: leave the painting project until next spring and go out on the lake.