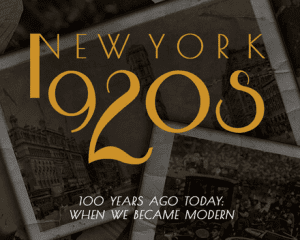 The online project New York 1920s, 100 Years Ago Today (When We Became Modern), sponsored by New York Tech (the New York Institute of Technology), features near-daily posts based on events of the day that occurred 100 years ago in the city of New York. The posts highlighting the culture and zeitgeist of 1920s in the city.

New York 1920s brings to life the history of the period by connecting events that link the 1920s with the city of New York today, including wealth disparities, housing shortages, racial tensions, police violence, immigration fears, and more.

Some of the 1921 developments that will be covered on the site soon that include:

For more information, visit the New York 1920s, 100 Years Ago Today (When We Became Modern) website.