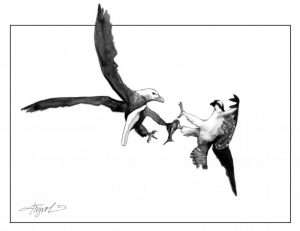 Picture a robin, out in the morning and hopping around the park. It finds breakfast in the form of a worm, but out of the nearby trees swoops a bigger bird. The bigger bird acts threatening, and the robin surrenders its worm like a kid giving up their lunch money to the school bully. It’s a common scenario between many kinds of animals – and a classic example of kleptoparasitism.

Kleptoparasitism is parasitism by theft, usually of food. Like in other types of parasitism, one animal is harmed by the interaction while another benefits from it. Ecologists who study kleptoparasitism, including Erika Iyengar of Muhlenberg College in Pennsylvania, measure “harm” and “benefit” in terms of each animals’ energy budget. In the case of our two birds, the robin loses energy looking for a breakfast it never gets to eat, while the bully bird gobbles a free meal.

While many kleptoparasitic interactions remind me of mealtimes with my two-year-old, who helps herself to whatever is on my plate, Iyengar points out that kleptoparasitism is defined as occurring between unrelated individuals. Often, but not always, the animals involved are two separate species.

Kleptoparasitism comes in two flavors: obligate and facultative. Obligate kleptoparasites are rare and completely reliant on stealing food from a host. An example is the tiny pea crab, which settles inside bivalves such as oysters; the female crab remains in the same oyster to maturity and gains all its food by stealing from the host. Most kleptoparasites are facultative, meaning they can steal if they want to – and if the opportunity arises – but can also hunt or forage for themselves.

Kleptoparasitism is widespread throughout the animal kingdom but is best studied in birds, where the behavior is always facultative. Iyengar explains that birds are an attractive target for other, thieving birds because they frequently transport high quality food items. The period of time between catching the food and consuming it offers a window of opportunity for a kleptoparasite.

On a recent trip to Maine, my family and I watched an osprey fly across a bay carrying a fish in its talons. We were puzzled when we noticed a larger eagle making a beeline for the osprey. Both birds disappeared behind a tree, and the osprey emerged minus the fish, which had apparently been snatched by the eagle.

Animals that store food are also vulnerable, as a kleptoparasite can take advantage of the original owner’s absence to snatch the cached food. Some web-building spiders store wrapped prey, creating an opportunity for kleptoparasitism by other spiders. Similar interactions have been observed in rodents, bees, and ants, to name a few.

Thievery may seem like a great way to get a free meal for animals clever or bullying enough to pull it off. But there are risks involved in this enterprise, too. “Evolutionarily, why work if you can steal?” asks Iyengar, then answers her own question: “Because you can get yourself bashed.”

To illustrate this point, Iyengar points to the north Atlantic subtidal whelk, which looks like a large snail and will help itself to a sea star’s prey. As the sea star is distracted by eating at one side of the prey, the whelk will nibble from the other. What makes this behavior unusually bold is that the whelks are routinely eaten by those very same sea stars.

Kleptoparasites are constantly assessing the risk of retaliation from the intended victim versus the reward of a free lunch. These assessments are likely to be instinctive for most animals, and Iyengar compares them to our own responses to enticing food aromas. For example, tempted by the alluring scent of freshly baked brownies, we might sneak one from the pan, even though we know doing so could anger our partner, who made them for a work party.

Of course, many of us are familiar with animals acting as opportunistic feeders. You may have lost French fries to a gull during a picnic, for instance, or had your food box raided by a bear while backpacking. Most food-stealing interactions involving humans, however, don’t qualify as true kleptoparasitism, since these thefts are unlikely to affect our long-term energy budget. After all, unlike a robin or a sea star, most of us can easily get to the grocery story – or the garden – to restock.

Rachel Sargent Mirus lives in Duxbury, Vermont. Illustration by Adelaide Murphy Tyrol. The Outside Story is assigned and edited by Northern Woodlands magazine and sponsored by the Wellborn Ecology Fund of the New Hampshire Charitable Foundation.