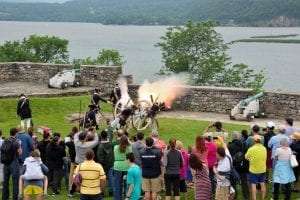 This July, Fort Ticonderoga will celebrate Independence Day with a month of special events and programming, including a holiday weekend filled with historically-accurate demonstrations, a mid-month, two-day reenactment of the 1777 siege of Fort Ticonderoga and a late July 1776-themed concert series.

Visitors will be able to experience the American Revolution on the very ground where the fight for liberty occurred, and join museum staff and costumed interpreters as they recreate in real time the events of July 1776.

The holiday weekend will feature the real fireworks of July 4th — the flash of musketry and boom of cannons — during dramatic weapons demonstrations, and Northern Continental Army soldiers who ply their trade as shoemakers and tailors to outfit the fledgling American army. Daily fifes and drum performances will be held from June 30th through August 22nd.

From July 24th-25th, visitors can catch a two-day reenactment of the 1777 siege of Fort Ticonderoga, and watch as the Americans try to hold the line in the name of liberty. The month of programming concludes on July 31st and August 1st with Fort Ticonderoga’s Sound of 1776, a blend of musical concerts, living history vignettes and thrilling weapons demonstrations that tell the story of 1776 when the American Army heard the Declaration of Independence and welcomed the birth of a new nation.