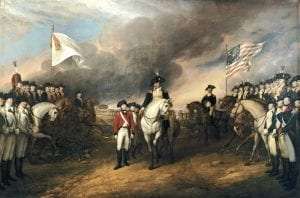 The Huddy-Asgill Affair was an event that occurred towards the end of the American Revolution, the result of ongoing killings taking place between the Patriot and Loyalist factions. Joshua Huddy, a captain of the Monmouth Militia and privateer was overwhelmed and captured by Loyalist forces at the blockhouse (small fort) he commanded at the village of Toms River, New Jersey. He was accused of complicity in the death of Philip White. Huddy was conveyed to New York City, then under British control, where he was summarily sentenced by William Franklin (Loyalist son of Benjamin Franklin) to be executed.

Huddy was held in leg irons aboard a prison ship until April 12th, 1782, when he was taken ashore and hanged, after first being allowed to dictate his last will. Loyalists pinned a note to his chest reading “Up Goes Huddy for Philip White” and his body was left hanging overnight. He was buried at Old Tennent Church by Patriotic supporters. Huddy’s execution was carried out by Richard Lippincott, who was eventually court martialled by the British for this crime.

In a retaliatory measure, General George Washington took action against an innocent British officer, Captain Charles Asgill, who was condemned to be hanged, in contravention of the Articles of Capitulation.

To this end lots were drawn amongst 13 British Captains on May 27th, 1782. As America’s allies, the French monarchy became involved and let it be known that such measures would reflect badly on both the French and American nations. The French Foreign Minister, the Charles Gravier, Count de Vergennes, wrote to Washington on July 29th, 1782 to express these views. After a six-month ordeal, awaiting death daily, the Continental Congress eventually agreed that Asgill should be released to return to England on parole. According to Ambrose Vanderpoel, Asgill did not receive his passport to leave imprisonment in Chatham, New Jersey, until November 17th, 1782.

This event will look at what happened when the documentation regarding this incident came to General’s Washington’s attention while he was headquartered in Newburgh in 1782, and how the outcome could have hindered the fight for American independence.

This program is free and open to the public, and can be viewed on the Palisades Interstate Park Commission Television YouTube after 2 pm on June 19th. For more information, call (845) 562-1195.

Painting of Cornwallis’s surrender in October 1781 following the siege of Yorktown, after which Asgill became a prisoner of war.