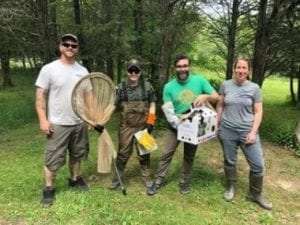 According to a press release issued by DEC, on May 22nd, Environmental Conservation Officer DuChene responded to reports of an injured Great Blue Heron in the Town of Chester.

When she arrived, Officer DuChene met with the head keeper and park supervisor for Trailside Museums and Zoo at Bear Mountain State Park to develop a plan. With help from volunteers, Officer DuChene and the other responders successfully captured the injured Blue Heron and transported it to Missy Runyan and her staff at the Friends of the Feathered and Furry Wildlife Center in Hunter.

The medical staff determined the bird likely fractured its radius and ulna after striking a powerline while in flight. After required surgeries, the Great Blue Heron is making a speedy recovery and will eventually be released back to its natural habitat in Chester.

Read about the lives of great blue herons here and more about birds in New York State here.