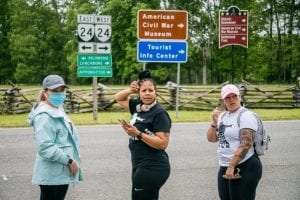 Members of the FreeThemWalk team arrived in Peterboro on Monday, May 31st to tour the Gerrit Smith Estate National Historic Landmark and the National Abolition Hall of Fame and Museum. The Team started its 900 mile walk in Lynchburg, VA, and plans to finish the walk in Buffalo on June 19th, in time for the Juneteenth Festival.

The FreeThemWalk Team follows many of the Underground Railroad paths of the network that provided aid and safe houses to enslaved peoples heading north to escape slavery in the south. Hundreds of freedom seekers found support and escape in Upstate New York the first half of the 19th Century.

The FreeThem Walkers recognize that human trafficking is modern-day slavery, and there are many victims in the United States. To help stop human trafficking, the team educates others about the crime and informs them how to identify and help victims. The Free Them Walk is made of a group of modern-day abolitionists who spread awareness to light a path toward freedom for enslaved people today.

The FreeThem Walkers are filming a documentary as they walk their thirty miles per day. Along the way, they will be making visits to meaningful places, such as the Stephen and Harriet Myers Residence in Albany, the Gerrit Smith Estate National Historic Landmark in Peterboro, the Harriet Tubman Residence in Auburn, and the Niagara Falls Underground Railroad Heritage Center in Niagara Falls.

Photo of FreeThem Walkers on their 900 mile anti-slavery journey traveling parts of the Underground Railroad provided.