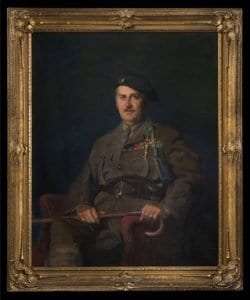 Fort Ticonderoga has received funding from the International Paper Foundation to support the preservation and installment of a portrait of First World War veteran and Fort Ticonderoga museum co-founder Stephen HP Pell.

Fort Ti is conserving this painting as it prepares to tell the many stories connected to the National Historic Landmark Pavilion, the ca. 1826-1837 summer home of the Pell family at Ticonderoga.
The portrait, along with a full-length portrait of the Pell family are expected to be installed in the Pavilion, when it opens to the public this August.

The Pavilion was built as a summer home in 1826 by William Ferris Pell and is considered by scholars to be one of the region’s earliest summer homes. By the early 1840s the house was used as a hotel, its primary function through 1900.

As a hotel, the house welcomed travelers passing through Ticonderoga while traveling by steamboat on Lake George and Lake Champlain. The hotel is known to have accommodated such guests as Robert Todd Lincoln, son of President Abraham Lincoln; the prominent French & Indian War historian Francis Parkman; and prolific Adirondack photographer Seneca Ray Stoddard.