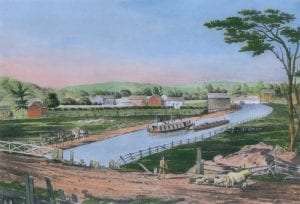 The new documentary Floating Ideas: How the Erie Canal Helped Shape America is set to premier on WCNY-TV on June 29th at 9 pm. The half-hour documentary examines the spread of ideas along the Erie Canal with emphasis on women’s rights, suffrage, and the quest for social justice.

Although the Preamble of the Constitution begins with “We the People of the United States,” expanding who “we” means to include women, Native Americans, and people of color has been a long and enduring fight. Floating Ideas explores the Erie Canal’s role in shaping the narrative and expanding our national identity.

The film will air again on WCNY-TV on July 4th at 1 pm and premiers on YouTube on July 5th.

The documentary was produced by WCNY Public Media for the Erie Canalway National Heritage Corridor with funding support from the National Park Foundation, the National Park Service, and the New York State Canal Corporation.