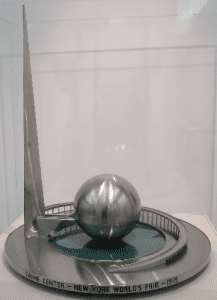 On April 30th, 1939, President Franklin Roosevelt opened New York’s World’s Fair with an address in which he praised the commercial festival as a “symbol of peace.” An idea dreamed up at the height of the depression, the theme of the Fair was “The World of Tomorrow.” Its opening slogan was an inspiring “Dawn of New Day.” 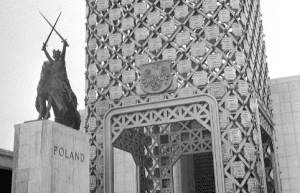 Planners had been given permission to develop 1,200 acres at Flushing Meadows in Queens for the second-most expensive American exhibition of all time. The Trylon and Perisphere structures were its iconic symbols. Countries from around the world sent representatives to build pavilions and organize elaborate displays. Over the course of two seasons, forty-four million people attended the exhibition to catch some idea of what tomorrow might bring.

The dream of peace lasted briefly. The future soon turned black. With the German invasion of Poland in September/October 1939, the world plunged into the nightmare of another world war.

A Pole in Paris 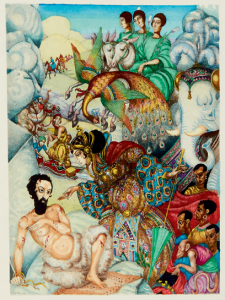 The Polish Pavilion at the Fair was composed of a boxy tower and featured twenty-three paintings depicting the contribution made by Polish natives to the history of the United States. Many of these pictures specifically highlighted noteworthy political connections between the two countries. Arthur Szyk (pronounced Shik) was the artist who had created these works.

Born on 16 June 1894 in Lodz into a prosperous Jewish family, Szyk was an artistically gifted youngster. Between 1919 and 1920, during Poland’s war against the Soviet Bolsheviks, he served as a soldier and contributor to the Department of Propaganda. It was here that he developed a talent to produce biting drawings and caricatures on contemporary political themes.

In 1921, he moved to Paris where he lived for ten years and established his name as an artist with international appeal. He settled in Montparnasse to be at the center of artistic activity, joining Chagall, Picasso, Modigliani, Duchamp, and many others. He was exposed to various modernist experiments, but also developed more traditional interests. He was particularly attracted to Byzantine design and the medieval skill of illuminating manuscripts. Both strands were fused in his work as a book illustrator. A sound knowledge of tradition formed the base of his modernism.

Amongst the books he embellished, two examples stand out. Gustave Flaubert’s La Tentation de Saint Antoine (The Temptation of St Anthony, 1926) and Pierre Benoit’s Zionist novel, Le Puits de Jacob (Jacob’s Well, 1927) are filled with decorative illustrations that are vivid in color and sharp but graceful in line. In his work, Szyk mastered the labor intensive stencil (“pochoir”) technique which demands that each layer of color has to be applied by hand. The method became identified with the Art Nouveau and Art Deco movements.

The books were produced in a limited edition of 250 copies and produced on (expensive) Japan paper. During the 1920s, Szyk was celebrated in Paris as a virtuoso of the illustrated book. 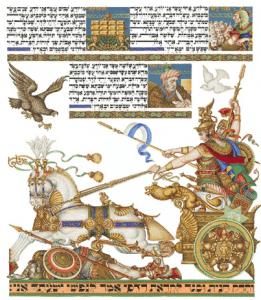 Having returned to Poland, Szyk’s art became more politically engaged with the rise of Hitler. He felt compelled to face the Nazi menace. Drawing on his earlier experience as a soldier-propagandist, he used his artistry to expose evil in a series of satirical prints that maintained the aesthetic quality of his earlier illustrative work. Szyk lifted satire to a new artistic level.

Political events led to the creation between 1934 and 1936 of a series of illustrations for the Haggadah (a guide to the Passover seder or “order” which incorporates prayers, blessings, rituals, and fables) that were inspired by the traditional illuminated manuscripts he had studied and admired.

Known as the Szyk Haggadah, this splendid work was too ‘dangerous’ for publication in Poland as the artist drew a direct parallel between the policies of Nazi Germany and the acts of genocide described in the Book of Exodus. His retelling of Jewish liberation from Pharaoh’s repression was intended as a depiction of the plight of Polish and European Jews in the 1930s.

Ultimately, the Beaconsfield Press was founded in London in 1937 for the sole purpose of publishing the book. In order to supervise every aspect of its production, Szyk moved to London. The book was edited and introduced by Cecil Roth, the British doyen of Jewish history. Upon release of the 1940 vellum edition in 250 numbered copies, it was the most expensive book in the world. The editor of the Times Literary Supplement ranked it amongst the most “beautiful books that the hand of man has produced.”

Dedicating his narrative to George VI, Szyk stressed the key role that Britain would have to play in Jewish survival. Against the background of unfolding terror in Nazi occupied Europe, the book was a deeply personal and political statement in which anguish and aesthetics seem to reinforce one another. With the German invasion of Poland Szyk found himself stuck in Britain. At the beginning of July 1940, with the support of the British government, he left London for New York on an assignment to communicate the struggle against Nazism and inform the Americans about the gravity of the threat to European civilization. 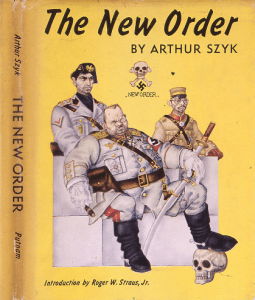 Szyk had first visited America in 1934 on an exhibition tour of his work. Opening at New York’s Brooklyn Museum, the tour included the Library of Congress where a series of thirty-eight miniatures commemorating George Washington and His Times was on display. The artist had embraced the nation’s democratic spirit long before it became his adopted country.

Throughout his career he had created art in defense of human dignity and against racial hatred. Settling on West 74th Street, Manhattan, Szyk produced hundreds of anti-Axis cartoons in support of the Allied war effort. Describing himself as President Roosevelt’s ‘Soldier in Art’, his caricatures appeared everywhere, in newspapers and magazines, including The New York Post, The Chicago Sun, The American Mercury, Collier’s, and Esquire; on posters, postcards, and on stamps. 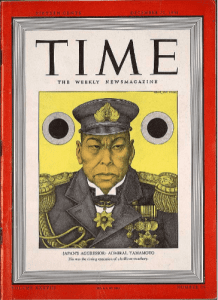 A portrait on the cover of Time of Japan’s Admiral Yamamoto, architect of the attack on Pearl Harbor, made an instant impact. Published on December 22, 1941, two weeks after the debacle, the powerful image created intense anxiety about an adversary who had fearlessly undermined America’s military might. As a caricature, it was a masterpiece.

Szyk’s illustrations were published in two compilations, The New Order (1941) and Ink & Blood (1946). During the war and afterwards, his art also drew attention to the Native American struggle and to the racism directed towards African Americans.

Arthur Szyk died in New Canaan, Connecticut, in September 1951. Today, he is remembered in a smallish circle of collectors and bibliophiles. Otherwise his work has been largely forgotten. He is categorized as a ‘political artist’ who, haunted by the brutal treatment of fellow Poles and European Jews, had declared a one-man war on the enemies of democracy.

But the world moved on, new tyrants emerged whilst the presence of past dictators receded in our collective memory. To the public at large, Szyk’s oeuvre seemed dated. As an artist he was a prisoner of his era. His frame of reference was no longer ours. As so often, history tends to deal in platitudes.

The “dance macabre” is a late-medieval allegory on the universality of death. No matter one’s social position, the grave unites us all. The dance consists of Death personified, leading a row of figures from all walks of life, typically with the skeletons of an Emperor, a cardinal, a noble women, and a pretty girl.

Creating Satan Leads the Ball in 1942, Szyk turned the historical Dance of the Dead into a contemporary Dance of Murderers by presenting a nightmarish image that could have originated in a Hieronymous Bosch painting. Led by Lucifer, the group comprises the main Fascist representatives, including Hitler, Goebbels, Göring, Mussolini (with his trousers down), and French collaborator Philippe Pétain. At the end of the line appears Brünnhilde, a key figure in Richard Wagner’s Der Ring des Nibelungen. Around the fringe of her robe are the words of the old anti-Semitic curse “Jude verreck” (Death to the Jew). 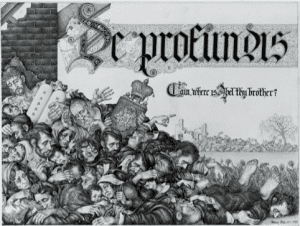 Szyk created De Profundis (1943) in the midst of war as reports began to surface of the atrocities and genocide. Allied victory was a distant dream at the time. Szyk applied Christian iconography to create his Holocaust image by drawing on Psalm 130: “Out of the depths I cry to you, O Lord. Lord, hear my voice! Let your ears be attentive to the voice of my supplications.”

With its gripping picture of dead and dying Jews, this was a cry for Allied intervention to end their suffering. It was distributed widely in the United States in an effort to combat anti-Semitism at home. As a work of art driven by pain and purpose, it finds an equal in Francisco Goya’s ‘Disasters of War’ etchings, and is on par with Picasso’s La Guernica. 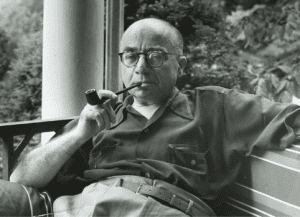 From the outset, the call for modernity contained a political dimension. The artist opposed the “rotten” morality of modern times by rejecting a code of conduct that tolerated social misery and engaged in war. At the same time, there was a demand for art to be independent of (moral) restraints and restrictions. The pull between these two conflicting interpretations persists throughout recent history.

One theory claims that creative activity is an aim in itself and should be free from all “claptrap” (according to James McNeill Whistler). The other regards art as a vehicle for carrying a social program or moral message. Modernist artists endeavored to fuse these opposing strands and turn aesthetics into a project for building a brighter future.

Arthur Szyk exemplified this attempt. He once said, “Art is not my aim, it is my means.” Although many of his book illustrations were art for art’s sake creations, most of his work conveyed a political message without ever sacrificing aesthetic standards. This tension, apparent in a range of activities from book illustration to Judaica and war images, gives the artist’s oeuvre a distinct modernist look. Szyk deserves a place close to Marc Chagall in the gallery of avant-garde artists.