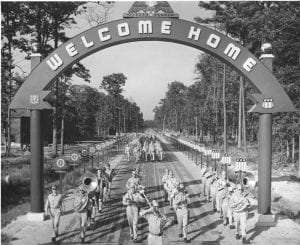 The Adirondack Experience (ADKX) is set to reopen to the public with “From Wilderness to Warfront: The Adirondacks and World War II,” a new exhibition focused on the contributions of Adirondack people to America’s World War Two effort.

The exhibition, developed in conjunction with the war’s 80th anniversary, captures the impact of the war on the Adirondacks, through both the experiences of the men and women who left to serve and those who stayed behind in the region.

“From Wilderness to Warfront: The Adirondacks and World War II” features an extensive array of artifacts and ephemera, including photographs and scrapbooks; letters and journal entries; military uniforms and insignia; advertisements, signage, and graphic works that advanced the war effort at home and abroad; and a wide range of other objects.

The exhibit also includes oral histories from two Adirondack veterans — Private Charlie Smith and Lt. Colonel David Hanning — whose recollections and stories are captured for the first time as part of the exhibition. Those histories will also live on the ADKX website. The show will remain on view through ADKX’s summer season, closing on September 30th, 2021

To celebrate the formal opening of the summer season and to engage audiences further with the exhibition, ADKX will host a day of activities inspired by the World War II era. From 10 am to 4 pm on July 1st, visitors will be able to enjoy big band sounds from the 1940s in a festive outdoor environment, decorated with red, white, and blue bunting and banners. Children will be able to draw their own “dog tags” and pose like Rosie the Riveter in a photo area, with images available to take home. Smith and Hanning will also be onsite to greet and talk to visitors about their experiences and the exhibition.

“From Wilderness to Warfront” covers a wide range of topics relating to the war effort, from America’s entry into the Second World War to the experiences of soldiers and nurses in training and on the field to the challenges faced by communities in the Adirondacks and across the United States, and through to the healing and rebuilding that took place after the war. Each of these subjects is illuminated through both objects of national relevance, such as propaganda produced by the government and circulated through the press, and personal effects that capture memories and responses in journal entries and letters.

The exhibition features a selection of stories about individuals from the Adirondacks, including Gladys Hunt (1915-2008) from Indian Lake, who enlisted in the Army Nurse corps in 1943 and served on the frontlines in hospitals in France, Holland, and Germany. After Hunt was honorably discharged in 1946, she enrolled in Pratt Institute, where she focused on designing one of the first truly wheelchair-accessible kitchens, inspired by her work with soldiers who were disabled. Although she received very little credit for her innovations, she was instrumental in furthering modern accessible design.

Another example is Clarence Petty (1905-2009) from Coreys near Saranac Lake, who enlisted in 1942 and served as a transport pilot in the Pacific. After the war, he returned to the Adirondacks and put his flying skills to use as a ranger in the NY Department of Environmental Conservation. He became the first person to extinguish a forest fire by dumping water from an airplane, and his outspoken commitment to conservation contributed to the creation of the Adirondack Park Agency.