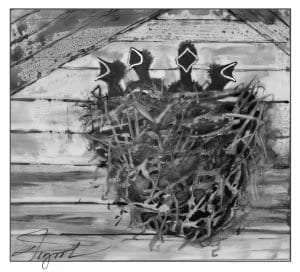 I never tire of watching the aerial acrobatics of swallows as they swoop over fields, darting back and forth to snap up flying insects. With their smooth, flowing flight and pointed wings, they are beautiful, graceful fliers. Tree swallows and barn swallows are the most abundant and widespread of our six northeastern swallow species, and these are the birds I see hunting insects on summer evenings.

The tree swallow, with its iridescent blue-green back and bright white breast, is the first swallow to return in spring from its wintering grounds in the southeastern U.S. or Central or South America. If insects are still scarce, it will consume seeds and berries. Tree swallows prefer to breed near water in marshes, swamps, or wet meadows that produce lots of flying insects. They most often nest in tree cavities or birdhouses and regularly use my bluebird boxes.

Ornithologist David Winkler of Cornell, who has studied tree swallows for over 30 years, found that they don’t begin to breed until the availability of flying insects reaches a certain level. The male tree swallow courts the female in the air, and later she builds a cup-shaped grass nest lined with feathers from other bird species. Tree swallows often display or play with these feathers and will fight over feathers with other birds. They are not strictly monogamous and often mate outside the pair. Males sometimes attend two different mates and nests. These birds are highly social and in good habitat frequently nest near other tree swallows. After the young have fledged, I often see families of swallows lined up on high utility wires.

In his book Life Histories of North American Birds (1942), ornithologist Arthur Cleveland Bent described how tree swallows forage: “tour(ing) over meadows, ponds, and rivers, veering from side to side, doubling back with marvelous quickness, snatching up insects as they overtake them or meet them in the air, coursing low down over the meadow grass where flies abound, or mounting, crisscross through the swarms of higher flying insects, gorging their throats.” When there is a hatch of insects rising from the water, many swallows may gather to feed. Aquatic insects, such as mayflies and dragonflies, which contain omega-3 fatty acids, are important to the diet of these swallows, and studies have shown that chicks that received omega-3s developed faster than those that did not, even if they received less food overall.

Barn swallows have a shiny cobalt-blue back, orange throat, pale orange breast, and deeply-forked tail. They return from wintering grounds in Central and South America about a month after tree swallows to open areas such as farm fields, parks, and beaches. Historically, these birds nested in colonies in rock caves, but after European settlement, they began building their nests in barns, outbuildings, and under bridges. Barn swallows often nest in our garage, barn, or chicken coop, plastering their half-cups of mud pellets mixed with grass against a beam. Last year several fledgling barn swallows ended up on the roof of our house on their first flight. The next evening, they were perched in a tree above our deck, and we enjoyed watching the parents fly back and forth bringing food to them.

Barn swallows regularly follow farmers plowing or mowing to catch the insects stirred up in the process. They will also glean insects off the backs of livestock. Like tree swallows, they drink and bathe on the wing by skimming their bodies across the water. Studies by Winkler and Dreelin suggest that swallow species avoid competition by dividing the airspace: barn swallows fly lowest, tree swallows in the middle, and purple martins (the largest northeastern swallow) the highest.

Populations of swallows and other aerial insectivores have declined significantly in recent decades, likely due to multiple factors, such as decreases in insect abundance and quality, bioaccumulation of pesticides from prey, mismatches between the timing of insect hatching and nesting periods due to climate change, habitat loss, and conditions on migratory stopover and wintering grounds. According to the North American Breeding Bird Survey, the population of barn swallows decreased 46 percent between 1966 and 2014, and the population of tree swallows dropped by 49 percent.

One way to help tree swallows and barn swallows is to provide nest boxes. Plans are available at nestwatch.org. These birds will help control insects in your yard, and watching these graceful fliers can provide hours of enjoyment.