Downtown Troy developed rapidly throughout the 19th century. The bustling river city saw a devastating fire that ripped through River and First Streets and the surrounding area in 1820. Troy’s business community quickly rebuilt, this time with many more brick buildings. As the century progressed, River Street and the downtown blocks that connected to it saw vast growth and development. 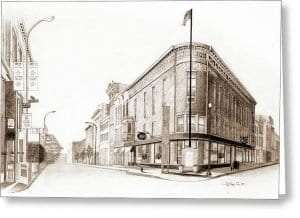 One of Troy’s pre-Civil War Troy developers was Nathan Dauchy. He came from an old Troy merchant family. Dauchy family members built two buildings on River Street for their grocery and paint businesses. One building was replaced by a larger one in 1886, giving us the Dauchy Building we know today, at 275 River Street.

Nathan Dauchy, who was also a prominent attorney and politician, built his building on the corner of River and 3rd Street in either 1850 or 1851. It was an awkward triangular corner, which had previously been home to a collection of wood-framed buildings. His three-story building built in a “flatiron” shape, with a rounded front was home to the Market Bank of Troy, hence the much later name “Market Block Building.”

Most people did not know it by that name. The building had storefronts on the ground floor, wrapping about 3rd and River, offices on the second floor, and a magnificent public auditorium on the third. That floor’s distinctive tall windows give away its purpose, and gave it a name. The space was called Harmony Hall.

Harmony Hall was a popular venue from the day its doors opened. All kinds of meetings and events took place there. The hall had a stage, a small balcony and plenty of floor space. In 1861, the first Civil War rally took place there, and Troy’s citizens passed a resolution to form a militia unit and to join surrounding cities and towns in doing what was needed to support the government of the United States.

When the 2nd Presbyterian Church was destroyed in a fire in 1862, Sunday services were held here. Other activities included union meetings and rallies, cotillions, concerts, dances and dance classes, theatrical performances, and other social and organizational activities. 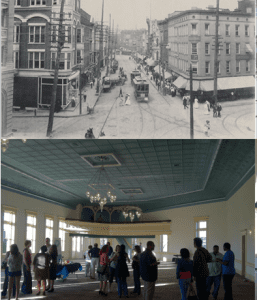 Although Nathan Dauchy owned the building for years, he never used any of the space for his own, or his family’s businesses. Over the next century, the storefronts would be home to jewelers, shoe shops, restaurants, men, women and children’s clothing stores, cigar stores, liquor stores and more.

The building passed through several owners over the century and a half, as well. It was always known as the Harmony Hall building until around 1980, when an ad in the October 28 Times Record announced the new branding as the Market Block. The building was lauded as being part of the historic downtown, and a shining example of Troy’s future.

This was fortuitous, as 1970s urban renewal had gutted large sections of downtown for the a mall, parking lots and a hotel. Further plans would have destroyed much of the rest of downtown’s historic fabric. Fortunately, those plans were scrapped in Troy economic struggles of the 1980s. 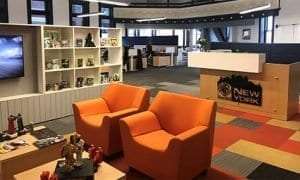 Today, Market Block Books enjoys its spot at the prow of this great ship of a building. Other storefront establishments include the Third Street Potters, and the Anchor Boutique. The Market Block building is now part of a larger collection of buildings adjoining it on both 3rd and River.

The stained-glass Harmony Hall sign still shines above the 3rd Street entrance, now leading to the offices above. Today, the auditorium is home to the New York division of Warner Brothers Games, one of the many hi-tech companies enjoying life in Troy.

Read more about the history of Troy here.