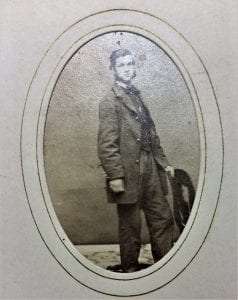 The guns at Fort Sumter had barely fallen silent when Hobart Walker – an idealistic New York teenager enlisted. From then until the very last days of the war, he successively wore the uniform of five different units, suffered wounds in battle and was held as a prisoner-of-war. Discharged for a disability, he re-enlisted. Discharged when his regiment was overstaffed, he re-enlisted. He evolved from starry-eyed youth to seasoned veteran, but he never lost sight of that which sustained him – the conviction that his country needed him.

The story of Hobart Walker is set to be told by John Ickes, his descendant and author of A Kepi in the Tide on Thursday, May 27th, at 1:30 pm. Presented by The Friday Harbor (Washington) Historic Preservation Program, Ickes will share Walker’s saga and the research that supported the book. This program is free and open to the public. Registration is required and can be completed by emailing Sandy Strehlou at sstrehlou@fridayharbor.org.

John Ickes is a retired naval cryptologist and genealogist. He lives in Virginia Beach with his wife Vonia.