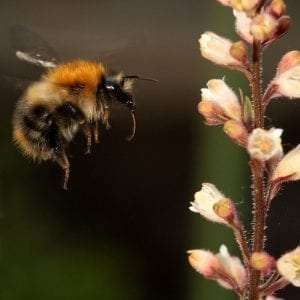 Shortly before apple blossoms open and honeysuckle flowers emerge from their buds, queen bumble bees awaken from their winter dormancy and begin the chore of establishing the small colony over which they will reign throughout the coming growing season.

In autumn, as asters begin to fade, the queen bumble bee abandons her colony and prepares for the coming winter. After mating with one or several male bees, she then begins to work her way through the layer of dead, leafy matter covering the ground and down into the soil. Like most other bugs, the queen lapses into a period of deep dormancy that often lasts seven months in this northern climate. Both the worker and male bumble bees in the colony eventually perish as the cold becomes more intense and sources of nectar completely disappear.

As the ground thaws in mid-April and her surroundings warm, the queen makes her way to the surface and starts to search for a site in which to locate her nest. In the Adirondacks, the bumble bee often places her colony in or near the ground. A small hole that leads underground, such as the entrance to a vacant chipmunk burrow or the opening to an abandoned vole tunnel is occasionally selected for the nest’s location. A tiny grotto among a pile of rocks or a hollow log lying on the forest floor is another site that the queen may use to house her colony.

After creating several waxy containers to hold her initial few eggs, the queen then begins the month long process of caring for her developing offspring. Since only the queen is present at this initial stage of the colony’s development, only a handful of eggs are produced in mid spring.

As early blooming plants open their flowers at the end of April or the first week or two of May, it is common for the queen bumble bee to regularly visit any plants that is yielding pollen and nectar. Unlike the honey bee which visits only a single type of flower each day when it becomes active in collecting floral material, the bumble bee is far less selective. This hefty, yellow and black insect is known to stop at a variety of sources of nectar and pollen during its daily search for nourishment, especially when flowers are still few and far between.

The bumble bee is well adapted for a life in our cold climate, and is not as adversely impacted by the unseasonably cool weather that may settle over us in May as are other species of bees and wasps. The larger size of this flying insect, along with its rounded body shape helps create a body mass to surface area ratio that limits heat loss better than any other social or stinging insect. The especially dense layer of “hair-like” bristles that cover the bumble bee’s body functions like a coat of fur to help retain heat. Additionally, when exposed to the cold, the bumble bee is reported to be able to vibrate certain muscles within its body much as a person shivers in order to elevate its internal temperature. Finally, when collecting food, the bumble bee never wastes energy in attempting to attack a larger intruder, like a human that may have wandered too close to the tree or shrub in which it is foraging.

The bumble bee is the most docile stinging insect in New York State and uses its primary defensive weapon only when something actually grabs it, or disturbs its nest. While the bumble bee occasionally flies close to people in order to investigate colorful articles of clothing they may be wearing, it inevitably realizes it cannot collect food from that object, and always leaves without incident.

Killing a bumble bee, especially at this time of the year, when its colony is just starting to function, is never an environmentally good action. Where honey bees are limited (such as in the Adirondacks, the bumble bee assumes the role of a primary pollinator of many flowering plants across the region.

If the insect you see flying around is large, rounded and fuzzy, it is a bumble bee, which should always be left alone as it is an important component of the environment here in the New York State.