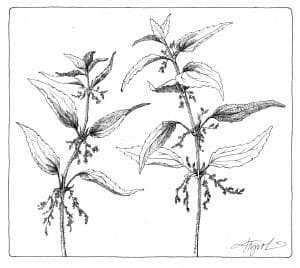 I often watch out for stinging nettles (Urtica dioica) while hiking. As you might guess from its name, brushing against this plant causes a bee sting-like burn that can last for hours. Despite this irritation, humans have used stinging nettles for centuries as food, fiber, and medicine, including as a treatment for arthritis pain.

After being diagnosed with a type of autoimmune arthritis, I found a study in which participants applied a stinging nettle leaf to their arthritic thumbs daily for one week. Researchers found that the treatment helped relieve the swelling and stiffness associated with arthritis. Stinging nettles were abundant where I lived, and though the sting would be uncomfortable, I wanted to give this treatment a try.

Stinging nettles grow in dense colonies that spread primarily through rhizomes: underground stems that grow horizontally and can send up new shoots. They tend to grow in places with moist, nutrient-rich soil and lots of sun, like roadside ditches, stream banks, and disturbed areas. The plants I found growing along the edge of a field were about knee-high, although they can reach five feet tall.

At mid-summer, these stinging nettles were flowering. Small, whitish-green balls grow in clusters on strands about three inches long. To reproduce, the male flowers, or racemes, explode and release pollen into the air. When the pollen reaches a female flower and travels into the ovary, the plant produces fruit, which dries into seed and falls off.

I examined the threatening hairs covering the stems and heart-shaped leaves. Not all the hairs sting, but the ones that do are longer, about 1 millimeter in length, and hollow. They contain a chemical cocktail similar to what’s found in some stinging insects, including acetylcholine, histamine, and serotonin, all neurotransmitters that cause pain and inflammation. Nettles also contain formic acid, tartaric acid, and oxalic acid, which extend the duration of the burn. The hairs have a high silica content, which makes them brittle. When someone – or something – brushes against the hairs, the tips break off, leaving sharp needles that inject the chemicals under skin.

With a gloved hand, I plucked a leaf and pressed it against my arthritic elbow. The burning was instant and powerful, and my skin became red and warm to the touch. Small welts appeared around the affected area, and the burning sensation lasted for a few hours. After repeating the treatment every day for a week, I decided it wasn’t for me. The burning was a distraction from arthritis pain, but I didn’t notice a change in inflammation.

Throughout the centuries, however, others have embraced the sting of this plant. Julius Caesar’s troops beat themselves with stinging nettle in a practice called urtication, to stay alert during long battles. In the 1700s, some believed urtication healed paralysis. Stinging nettle has also been used to stop bleeding, treat muscles spasms, and fight the flu.

Today, stinging nettle root is used in Europe to treat early stages of enlarged prostate by slowing the growth rate of some prostate cells. The plant may help lessen the itching and sneezing of hay fever by reducing the amount of histamine the body produces. Stinging nettle leaves are also a popular green that can be eaten once the sting has been deactivated through cooking or drying.

“They’re one of my favorite greens to have in the spring season,” said Arthur Haines, senior research botanist at the Native Plant Trust, who noted the leaves are nutrient dense, containing vitamins A, C, and K, as well as protein and high levels of minerals, especially iron. “We gather them when they’re only a few inches tall and the stinging hairs are still a bit flexible. There’s a little sting here and there but it’s not nearly as bad as it would be once all those hairs have become rigid and brittle.”

Though the sting protects nettles from predation by grazing animals, not all herbivores avoid it. A few butterfly species, including the red admiral, question mark, and Milbert’s tortoiseshell, lay their eggs on stinging nettle, where emerging caterpillars feast on the leaves. Aphids eat nettle leaves as well, and these insect populations, in turn, provide food for birds who may also eat the nettles’ seeds.

I will continue to watch out for stinging nettles while hiking. But rather than curse the plant, I’m eager to try it sauteed or dried as a tea, and to admire – from a distance – its multiple uses for both people and wildlife.

Hanna Holcomb was raised in northeastern Connecticut and is a naturalist at Grand Targhee Resort in Wyoming. Illustration by Adelaide Murphy Tyrol. The Outside Story is assigned and edited by Northern Woodlands magazine and sponsored by the Wellborn Ecology Fund of the New Hampshire Charitable Foundation.