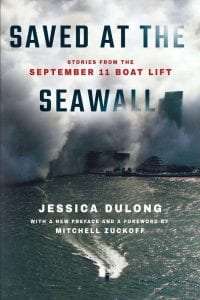 The new book Saved at the Seawall: Stories from the September 11 Boat Lift (Cornell University Press, 2021) by Jessica DuLong is the definitive history of the largest ever waterborne evacuation.

Saved at the Seawall looks at the dramatic story of how the New York Harbor maritime community heroically delivered stranded commuters, residents, and visitors out of harm’s way on September 11th, 2001. Even before the US Coast Guard called for “all available boats,” tugs, ferries, dinner boats, and other vessels had sped to the rescue from points all across New York Harbor. In less than nine hours, captains and crews transported nearly half a million people from Manhattan.

Filled with eyewitness accounts and written by a mariner who served at Ground Zero, Saved at the Seawall weaves together the personal stories of people rescued that day with those of the mariners who saved them. DuLong describes the inner workings of New York Harbor and the collaborative power of its community.