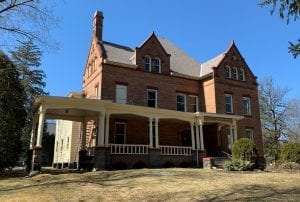 The Saratoga Springs Preservation Foundation will host a Historic Homes Tour on Mother’s Day weekend, May 8th and 9th. This year’s event will provide an opportunity to see the interiors of several homes on North Broadway, including spaces that typically are not accessible during an in-person tour.

Several homes in the North Broadway neighborhood will be featured – 605 North Broadway, including the Coach House; 748 North Broadway; and 199 Woodlawn Avenue. The tradition of including a “Rehab in Progress” continues this year with 687 North Broadway, the former Masonic Lodge. Not only have the owners granted virtual access, they are also allowing people to tour the building in-person. For an additional ticket, people can tour the building from 10 am to 2 pm on Saturday, May 8th. Rehab-In-Progress tour tickets are $15 for SSPF members and $20 for non-members.

Anne’s Washington Inn, located at 111 South Broadway, will host two programs on Saturday, May 8th. At 9 am Carol Godette will present “Inside Anne’s Washington Inn” as the Breakfast & Buildings lecture. Guests will enjoy light breakfast fare while learning about this historic hotel that has been owner-operated for three generations since 1943 and hearing stories of those who have visited over the decades.

At noon the Foundation will host Charlie Kuenzel who will present Lunch & Learn “North Broadway and the Evolution of Saratoga Springs.” Guests will enjoy a boxed lunch while Charlie shares about how North Broadway became the “address of status” and grew after the Civil War. Breakfast and lunch will be provided by the newly opened The Little Market at Five Points.

For more information or to purchase tickets, visit the Saratoga Springs Preservation Foundation website or call (518) 587-5030.