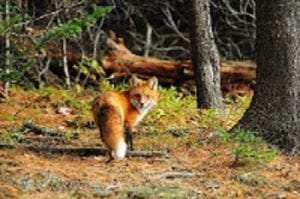 As leaves erupt from their buds on hardwood trees, which will cloak all of New York terrain again in green, red fox pups venture from their dens and begin to experience our vast, lush spring landscape.

In this northern climate, the red fox breeds during the very end of January through the first few weeks of February. As a result, the females give birth to their annual litter toward the very end of March, or during early April.

In the weeks prior to giving birth, each pair of red fox establishes a den that serves to shelter their pups from the bouts of inclement weather that often occurs in spring. A den also protects these helpless infants from being attacked and killed by other predatory creatures, such as coyotes, bears and various birds of prey.

While a pair of red fox may dig an entirely new den as the arrival of their annual litter nears, most fox simply take possession of any suitable den that already exists within their territory. An abandoned woodchuck burrow is occasionally revitalized for this purpose, because its chambers are deep enough, and its tunnels are of an acceptable diameter for this small dog to use. Similarly, an old, unused skunk den may be claimed by a pair of red fox, or a long-vacant fox den that is still in acceptable condition for renovation and occupancy. The red fox will also take advantage of a naturally occurring system of passageways and chambers that exist in a massive pile of boulders.

An older pair of red foxes often reuses the den they occupied in previous years, especially if the surroundings have remained unchanged. However, the pair will pass over a former shelter if the surroundings pose an increased risk of danger. For instance, should a pair of eagles, a red-tailed hawk, or a goshawk construct a nest nearby, or a family of coyotes elects to locate their den within the immediate area, the red fox may fail to return to a previously used den site and establish a new home in a setting that is safer for rearing the pups.

The development of red fox pups is slow; these creatures do not leave the safety of their den until they are nearly a month old. Even when they are 5 to 6 weeks of age, red fox pups remain close to the entrance of their den when they come into the daylight to play with one another, or with some favorite toy, such as a bone, stick or scrap of animal hide.

During the many weeks that the fox depends on a den for shelter, it is common for the family to move at least once, if not several times to different locations throughout their territory. It is believed by some naturalists that animals like the red fox move into a new den in order to limit their problem with skin parasites, like fleas, that can infest the bedding material on the floor of their resting chambers. This is why a family of red fox may suddenly disappear from a den where they seemed perfectly safe and content.

Because the red fox prefers to prowl for its prey along the edges of forests and in fields that have become overgrown with a dense layer of brush, this wild dog typically locates its den in a similar setting. In the forests of New York State, red fox tend to concentrate their activities, and locate their dens near small clearing, such as those created by an extensive blow down, where a rock outcropping has limited tree growth, or near a beaver meadow. Shoreline settings that border marshes, lakes and rivers are also regularly prowled by this wild canine, and contain their dens. Highways, especially along dirt roads that are not heavily traveled by vehicles, are still other places sought out by the red fox when it comes time to make a den.

For the red fox, the summer long process of introducing their newest litter of pups to their surroundings has recently started. In the coming weeks, they will be instructed on how to hunt, how to find food, and how to avoid danger.

Read more about foxes in New York State here, including decoding their calls, and how they den in suburban areas.