With the death of his patron Emperor Joseph II and the passing of his creative partner Mozart, Da Ponte’s career took a dive. Forced to leave Vienna, he moved to London (via Trieste). Fearing arrest for indebtedness, he fled to New York City by way of Philadelphia in 1805, lived for seven years in Sunbury, Pennsylvania, and returned to Manhattan where he remained until his death.

Da Ponte introduced American audiences to Italian literature and opera. He was the first Professor of Italian at Columbia College; he welcomed the first Italian opera troupe to the United States; and he founded the New York Opera House, the nation’s first company dedicated to opera.

A friend of Giovanni Casanova when living in Venice, his life story was full of scandal and antics, a libretto in its own right. As a consequence, the story of adventurism tended to obscure the contribution Da Ponte made in transposing Enlightenment ideals from Europe to America. 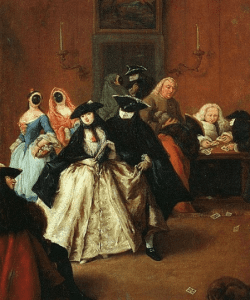 Lorenzo Da Ponte was born Emanuele Conegliano on March 10, 1749, in Ceneda in the Republic of Venice. Jewish by birth, his widowed father (a leather merchant) had the family converted to Roman Catholicism in 1764 in order to remarry. As was customary, Emanuele was baptized in the name of the local bishop, Lorenzo Da Ponte. He studied at Ceneda’s Seminary and was ordained a priest in 1773. That same year he moved to Venice where he taught Latin, Italian, and French.

The tradition of wearing masks started in the thirteenth century during Carnival festivities that preceded Lent. All social barriers were lifted. In disguise people mingled freely, played out their fantasies, and indulged in illicit activities. Carnival was a democracy of sin.

By the eighteenth-century, people had grown accustomed to wearing masks perpetually. Venetians wore them in public places and private homes. Foreign ambassadors and state officials, including the Doge (head of Venetian government) put on masks during ceremonies and negotiations.

Once settled, the young priest at the church of San Luca donned his mask and fell for the city’s temptations. A gambler, he had an affair with a married woman named Angioletta Bellaudi. Together they ran a brothel. Although accused of “concubinage” and the abduction of a respectable woman, it was his not his penis but his pen that made him an outlaw. The unstable political situation may have been the underlying reason for his troubles.

Cities prosper and cities decline. Venice had established a republican government that encouraged both trade and the arts, but during the 1770s its glory days were slipping. Like most European cities, reports on the American Revolution electrified politics. By 1775, translations of Benjamin Franklin’s work were circulating at Italian universities. The “Sage of Philadelphia” was widely praised and an emerging notion of trans-Atlantic solidarity made authoritarian regimes feel nervous.

Mindful of rising tensions, Venetian governors increased social control. Da Ponte’s enthusiasm for the American cause was seen as a threat. He got into trouble for an elegy inspired by the rebellion, entitled “The American in Europe.” Later, a privately circulated poem attacking “corrupt” authorities was leaked and widely read. In 1779 he was banished from Venice and her territories for fifteen years. 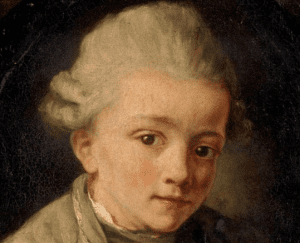 In 1781, thanks to an introduction to Antonio Salieri, he gained employment at the Italian Theatre of Vienna, the Emperor Joseph II’s favorite institution. Before long Da Ponte was collaborating with a young Spanish musical “sensation” Vincent Martín y Soler, but it was not until he met Wolfgang Amadeus Mozart that he began to explore his ability as a librettist to the full.

The Viennese years became the most productive of Da Ponte’s life. The partnership with the young composer evolved into the most successful collaboration in operatic history. He wrote the librettos for Mozart’s three greatest operas Don Giovanni, Le nozze di Figaro, and Così fan tutte. He also penned the libretto for Salieri’s Axur, re d’Ormus (‘King of Ormus’) which premiered in January 1788 and became Vienna’s favored opera, being performed more frequently than Don Giovanni.

In February 1790, a month after the premiere of Così, Joseph II succumbed to a fever; the following year Mozart, overworked and impoverished, died at the age of thirty-five. Within a short period, Da Ponte lost his patron and incomparable partner. The Emperor was succeeded by his brother Leopold II who had his own circle of favorite artists and bootlickers.

Da Ponte lost his standing in court and became a resentful outsider. His enemies began telling tales of misdeeds and scandals. He was dismissed from his post and ordered to leave Vienna. “Sacrificed to hatred, envy, the profit of scoundrels!” he wrote in his Memoirs.

Having decamped to Trieste, he fell for the charms of Ann “Nancy” Grahl, tutor to the children of a Dutch family, known locally as la bella inglesina. Twenty years his junior, she was the daughter of a German Jewish merchant who had spent time in London and converted to the Anglican Church. Her mother was of French descent. They married in August 1790. She bore him four children. 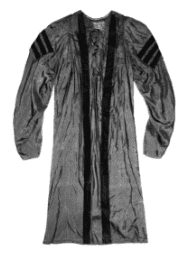 In August 1792, Lorenzo and Nancy set off for Paris in August 1792. Because of the political chaos in France they headed for London instead where they would live for twelve years. Lorenzo took on various jobs, including that of teacher and publisher of libretti. When that business failed, he set up as a bookseller at 5 Pall Mall, but remained in debt.

In 1804, with bankruptcy looming, Lorenzo’s wife and children joined her parents who had settled in Pennsylvania. A year later, facing debtors’ prison, he boarded the packet boat Columbia ad sailed to America. His first business attempt to support his family was running a grocery store in New Jersey. The venture failed.

A visit to Isaac Riley’s bookstore at 123 Broadway would have a major impact on his career. There he came into conversation with biblical scholar and poet Clement Moore whose father, Bishop Benjamin Moore, was President of Columbia College. With their help, Lorenzo established himself as a tutor to the sons and daughters of affluent New York families. He also imported books from Italy and set up a distilling firm. By 1811, he was bankrupt once more. Business was not in his bones.

Nancy’s parents invited the family to join them in Sunbury, Pennsylvania, where Lorenzo worked as a dealer in merchandise. His return to New York came as a relief. Clement Moore, by then a Professor of Greek and Oriental Studies, invited him to teach at Columbia College whilst encouraging his friend to continue importing books. Da Ponte also inaugurated a lecture series on Dante’s Divina Commedia, which introduced the poet to an American public. Some of those talks were published in the New York Review and Athenaeum Magazine.

In September 1825, Da Ponte was appointed America’s first Professor of Italian at Columbia. In an unusual arrangement, he was paid according to the number of his pupils. In the first year, a few students turned up. For the next thirteen years nobody registered for his class. Da Ponte referred to his academic status as “Professor Sine Exemplo” – unprecedented and unmatched. In May of 1827, Lorenzo announced that he had placed six hundred books in the Italian library. The collection in his own words represented the “flower of our literature in all the useful arts and sciences.”

In 1828, Da Ponte became a naturalized American citizen. It had been a long journey since his Venetian escapades in which he had expressed admiration for the democratic spirit of the Revolution. 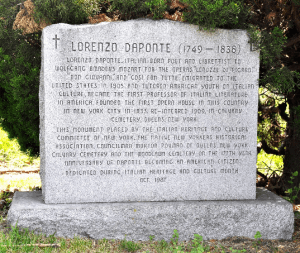 In 1825 Manuel Garcia arrived in New York announcing a season of choice Italian opera. His troupe of singers included his daughter Maria (she would become famous as Maria Malibran). The season opened on November 29, 1825, at the Park Theatre with Rossini’s Il barbiere di Siviglia. As New York had not discovered Italian opera, Manuel was hailed as a “musical Columbus.”

During the next ten months, seventy-nine performances were given, first at the Park Theatre, later at the Bowery Theatre. Da Ponte was keen for Garcia to produce Don Giovanni. On May 23rd, 1826, the first full American performance of the opera took place with Maria starring in the role of Zerlina.

Da Ponte’s final libretto L’ape musicale (The Musical Bee) premiered at the Park Theatre on April 20th, 1830. Nancy died shortly after – but Lorenzo pushed on with his projects. In 1833, he founded the Italian Opera House on the corner of Leonard and Church Streets, Lower Manhattan, the first purpose-built opera theater in the United States. The House lasted two seasons before bankruptcy. In 1836 the opera house became the National Theatre. Three years later it burned to the ground.

Da Ponte died in 1838 at 91 Spring Street, Manhattan. A funeral ceremony was held at St Patrick’s Old Cathedral on Mulberry Street. He was interred at a nearby cemetery that was demolished in 1909. His remains were moved without a headstone to Calvary Cemetery, Queens, where a marker was placed in memory of a cosmopolitan intellectual who had lived his life as if it were a libretto.