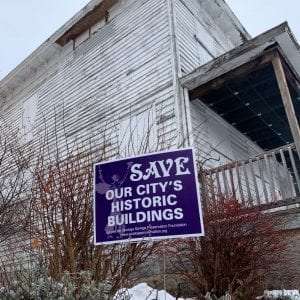 Saratoga Springs Preservation Foundation has purchased the building located at 65 Phila Street in Saratoga, with plans to restore and preserve the property.

The Foundation has advocated for the preservation of 65 & 69 Phila Street since the inception of its endangered buildings list in 1998. The 1851 Italianate style house clad with wood clapboard located at 65 Phila Street was constructed by Alexander A. Patterson, an architect and builder. That same year the brick Italianate style house located at 69 Phila Street was constructed by mason Robert Hunter. Both houses are listed as contributing buildings to the East Side Historic District listed on the National Register of Historic Places.

The prior owners purchased 69 Phila Street in 1994 for $41,000 and 65 Phila Street for $125,000 in 2002. Not only did those owners fail to maintain the structures and removed architectural features and portions of the buildings as they deteriorated, they also made inappropriate “temporary” repairs that have now been in place for several years. Although they were unwilling to invest in preserving the buildings during their ownership, they paid fees as well as hired legal counsel and design professionals to represent them in court and before the city’s land use boards

Most recently, the Foundation vocally opposed the owner’s proposals to demolish both buildings to construct new buildings. At the Design Review Commission meeting on March 24th, the owners withdrew their application to demolish 69 Phila Street because it had been sold to owners who plan to restore it. The new owners recently contacted the Foundation to share that they are looking forward to preserving the house and transforming it into a home for their family.

At that same meeting, the Design Review Commission, which is charged with preserving the historic, architectural, and cultural resources of Saratoga Springs, unanimously denied the proposal to demolish 65 Phila Street.

While the proposed demolitions were being reviewed by the Design Review Commission, the Foundation received widespread support throughout the community to preserve the two buildings – many placing “Save Our Historic Buildings” signs in their yards.

The Foundation regularly provides advisory opinions to the Design Review Commission as well as provides the only required local advisory opinions for capital improvements at Saratoga Race Course to New York State Historic Preservation Office. In addition, it offers guidance and technical assistance to property owners who are undertaking projects.

The Foundation plans to complete the exterior rehabilitation – including repairing and painting the clapboard and restoring windows and the front porch before listing the property for sale.

The Foundation’s initial goal is to raise $250,000, the preliminary estimated cost to complete the identified scope of work. However, that number could change once the Foundation has the opportunity to thoroughly inspect the building and get cost estimates.

In addition to its fundraising efforts, the Foundation will host a series of educational programs to educate the public about rehabilitating a historic house.