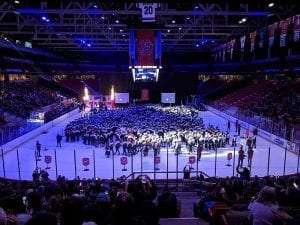 The Town of North Elba will enter a long-term lease agreement with the New York Olympic Regional Development Authority (ORDA) for their use of the former Lake Placid Memorial Hospital property.

The Town took over ownership of this property in 2019; this ownership will be retained and ORDA will lease the site for 50 years with a 50-year renewal for the purpose of expanding ORDA’s Olympic Training Center. ORDA will be responsible for the removal of the current structure, relieving the town of the financial burden of this undertaking, while upgrading the property.

The site had previously been considered as a potential location for several North Elba community programs, including a community center and daycare. The Town ultimately decided that it would be cost prohibitive to retain use of the property.

The renovation of the Olympic Center on Main Street is displacing the current administrative office space. A new ORDA building on the leased property is expected to host the 70 staff, freeing up space at the Olympic Center where an expanded restaurant is planned.