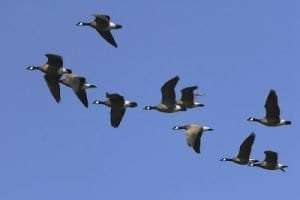 Among these impatient migrants to New York State each spring are pairs of Canada Geese that have overwintered in the windswept corn fields of Southern New York, and across the Pennsylvania and New Jersey countryside where they have found an adequate source of food.

Historically absent from most waterways in the Adirondack Park prior to the mid 1800s, the Canada Goose has become an abundant species of waterfowl in many sections of the Adirondacks populated by humans. When accompanied by its brood of young, a pair of adults avoids the heavily forested shorelines that characterize most bodies of water throughout this section of Northern New York.

It is large, open fields, especially those in which the grass is periodically mowed that attract this hefty herbivore. Golf course fairways near a pond or river, large athletic fields adjacent to a marsh or stream, and community parks and sprawling lawns that border a lake are all ideal settings for the Canada Goose.

The abundance of grasses, leafy weeds, grains and select soil bugs that serve as food to these honking giants attracts them to such open places. Additionally, this long necked bird is better able to scan the immediate surroundings which provide it with the opportunity to detect a predator when one is still a long distance away.

Upon their arrival, pairs of Canada Geese seek out a secluded location in which to make a nest. A remote section of a marsh along a stream is frequently selected. An open, sun-baked patch of low shrubs and collapsed sedges near the edge of a river is another type of setting that might be chosen for a nest, as is the roof of an abandoned muskrat house that sits back from the shore.

While these sites lack the grasses and other herbaceous plants that typify a well maintain lawn, such marshy communities still contain an assortment of non-woody vegetation useful to this grazer. The older adults that take up residence in such locations for the month long period of building a nest, laying eggs, and incubating them depend on their experience at locating various seeds and other wetland edibles to keep them sufficiently nourished.

Once their eggs hatch, the parents begin the process of relocating the family to a setting in which grasses are starting to grow.

As southerly winds eventually usher in more spring-like weather, flocks of Canada Geese can be heard and seen flying overhead in their characteristic “V” shaped formation. These are the birds that are headed much further north than the upper portion of New York State. The Canada Geese that have established breeding populations in many sections of the Adirondack Park over the past several decades have mostly returned from their wintering areas.

The creation of open spaces along lake shores and river edges that are carpeted with lush, green lawns has been an alteration of the Adirondack environment much to the liking of property owners and community residents alike. For the Canada Goose it is also a most welcome change to the shoreline, as it provides this large species of waterfowl with the opportunity to raise the young birds that will begin appearing by early to mid May.