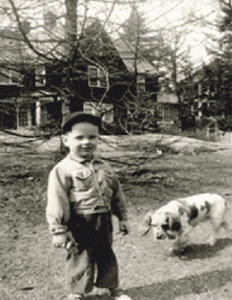 My father was employed as an administrator at the Mount McGregor Veterans Rest Camp, Saratoga County, upon his discharge from the Army. Mom was a Registered Nurse at the Camp Infirmary. I lived on Mount McGregor from April 1946, the day I arrived in my mother’s arms, until I left for Boy Scout Camp Saratoga in July 1960. Five boys and one girl within two years of my age lived on Mount McGregor during that time. We were a loosely knit mostly outdoor group.

One morning, waiting for the camp bus to take me to kindergarten, I wandered off to the blueberry patch behind a neighbor’s cottage. Kneeling in the patch, eating the berries, a snake slithered in front of my knees. Wide-eyed, I scurried to school with a less than amused bus driver.

School was in nearby Wilton. A two-classroom building. A basement cafeteria also served as the Kindergarten Room, Mrs. Hubinsky supervising both. Miss Hyatt’s classroom had grades 1, 2 and 3. Mr. Gainer’s classroom had grades 4 and 5. When our grade level was not being taught we put our head down on the desk, thereby enhancing our education in a previous grade or being introduced to a future grade. We enjoyed classes in physical education, music and art from traveling teachers.

Home was a sizeable three bedroom apartment in a sixplex cottage across from Artist Lake. The Veterans Camp was largely self-sufficient with a sizable farm in the valley below. I have no memory of going to a grocery store. Mom would simply call the “commissary” for delivery of vegetables, beef, pork, poultry, baked goods, milk etc, and she canned food for the winter. The basement had a large coal fired boiler. The coal served as encouragement for good behavior, lest a chunk take space in our Christmas Stocking. We were good kids – for the most part.

Unconstrained in our roaming through the forests and populated areas of the mountain, we hiked the rough roads and trails to Lake Bonita, Lake Anna, Sunset Rock, Northern and Grants Lookout and bushwhacked to countless other destinations. Inspired by Huckleberry Finn we lashed a log raft together on “Secret Swamp.” Daniel Boone inspired us to start a log cabin behind Lake Anna. Falling trees with our two man crosscut saw and axes we laid the base logs and started the second row before deciding home was OK. We enjoyed Lake Bonita with its abundant blueberries. Trout were visible in the crystal clear waters along the shores. Lake Bonita was the Camps water source – fishing was not allowed.

We fished in Artist Lake for Goldfish and caught frogs, tadpoles, turtles, newts, red efts, snakes and bumble bees by hand. A terrarium at home often housed pollywogs growing into frogs before release. We rode our single speed bikes throughout the hills and occasionally down to friends in Wilton, pedaling back up the mountain without a stop. The Camp had many amenities including a movie theater. Our parents brought us to films such as White Christmas, Randolph Scott westerns and others. We were banned from any sight of the theater building when Elizabeth Taylor’s Cat on a Hot Tin Roof played. Winter was a time for ice skating on Artist Lake, sleigh rides with our Flexible Flyer’s down the road to Lake Bonita and snow forts. We served as altar boys in the Camp Chapel and pinsetters for the Camp Bowling Alley.

We interacted freely with the camp residents playing softball on the site of Hotel Balmoral, swimming in Artist Lake with lessons in cannon balls and diving from the patients, shuffleboard under the terrace, crafts (copper reliefs, bead and leather work) in the Occupational Therapy shop. “Raccoon Man” visited a couple of summers hand feeding raccoons who would crawl up his panted leg, accept food with their paws, returning to the ground to eat. Frank Malzone’s (Boston Red Sox Third Baseman) father was a patient we came to know. We received autographed baseballs after his departure. I met veterans from the Spanish American War, the First and Second World Wars, the Korean and Lebanon Conflicts. They, as my father – a medic in Europe, rarely spoke of their experiences.

We visited Mrs. Gambino, caretaker at Grant’s Cottage, and frequented Grant’s Lookout. We discovered a deteriorating iron sided bench with wood strips at the base of a huge boulder down the mountain. We knew this was where President Grant spent his quiet moments.

Life was idyllic. The only childhood I knew – as it is for everyone, particularly of that era. Mostly unencumbered by TV (a 1950s 12-inch black and white screen with 2 snowy channels). No social media – we listened to the radio as a family occasionally. My earliest memory of American politics was attentively listening to the inaugural address of General Eisenhower. Recognizing I did not understand a word he said, I adjourned outside to build a snow fort in my “Glickmans” snowsuit. Red and black wool – head to toe.

Photo of the author Gene Phillips with dog Buff in front of the staff cottage at Mt. McGregor.

Gene Phillips grew up on Mount McGregor during the Veterans Rest Camp era (1945-1960). Gene owned a consulting engineering firm in Saratoga for over 30 years. Gene is a Wilton Resident and can be reached at phillassoc@aol.com. This article is condensed from a larger article. Glickmans was a clothing store on Broadway, Saratoga Springs (1929-1989).